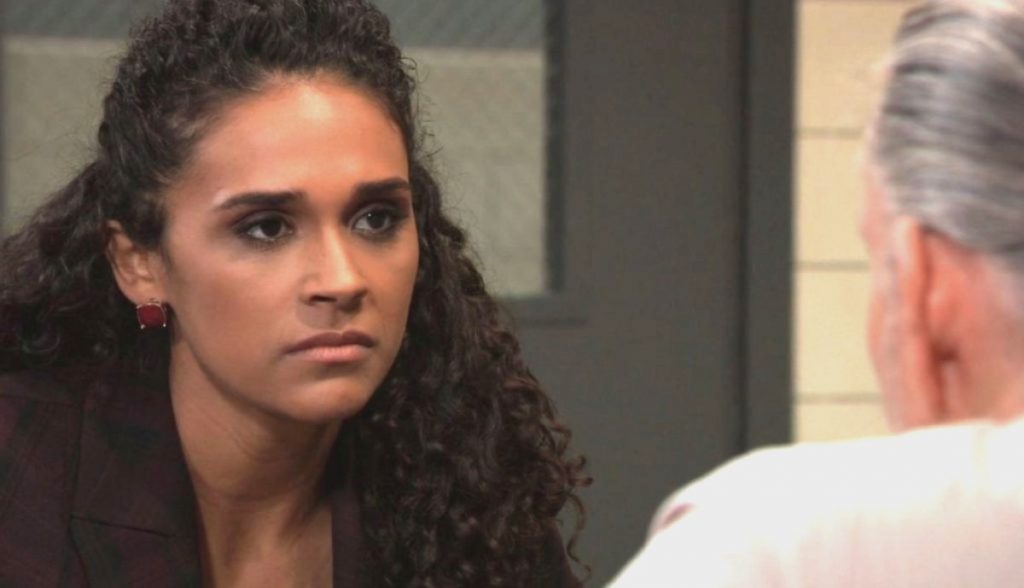 General Hospital spoilers are dripping with intrigue about what evil Cyrus Renault (Jeff Korber) could possibly demand from Jordan Ashford (Briana Nicole Henry) in order to get her son back.

Cyrus is demented and seemingly without moral boundaries, so Jordan is at the mercy of a bad, bad, man. Will she stoop to his level in order to keep TJ Ashford (Tajh Bellow) safe?

At the moment he is being held by Cyrus at an undisclosed location and his fate appears bleak.

But first, it would be remiss not to mention that many, many GH fans are absolutely loving Korber’s portrayal of Cyrus. Cyrus is oozing evil, the epitome of badness, and when he opens his mouth viewers can’t help but be spellbound by his malevolent intensity. Yet, for all the world by just looking at the husky, gray-haired Cyrus one would think he was a harmless, cuddly grandpa. Maybe it’s that cataclysmic schism between his appearance and his actions that is so riveting.

At any rate, Jordan would appear to be beholden to him now that he has her son. During a visit to Pentonville, she demanded to know what he’s up to and she then received a picture of TJ on her phone, looking quite out of it.

Her fear was palpable and what mother wouldn’t do anything in the world to help her child?

So, what will Jordan have to do in order to gain TJ’s safe exit from the sordid little space he’s currently in? There are so many soapy and drama-filled possibilities, starting with the simple one, Cyrus’ release from prison.

In the end it would cause all sorts of mayhem as he goes mano a mano against Sonny Corinthos (Maurice Benard).

But what if his proposal is much more sinister?

General Hospital Spoilers – Could it be that Cyrus Renault is TJ Ashford’s biological dad?

Maybe Cyrus wants Jordan to confess to her past indiscretions concerning her involvement in his operation. That would surely sink her career as D.A. not to mention tarnish her reputation.

But what if he wants her to admit to another, uber-scandalous indiscretion? Could it be that Jordan and Cyrus hooked up back in the day, and TJ is the result of that alliance?

What happens next if Cyrus turns out to be TJ’s biological dad? Only time will tell, so stay tuned to General Hospital airing weekdays on ABC. And don’t forget to check back here regularly for all your General Hospital news, information, and spoilers!

Bold and the Beautiful Spoilers: Ridge and Brooke Finally Reunite- Will He Find Out About The Kiss?