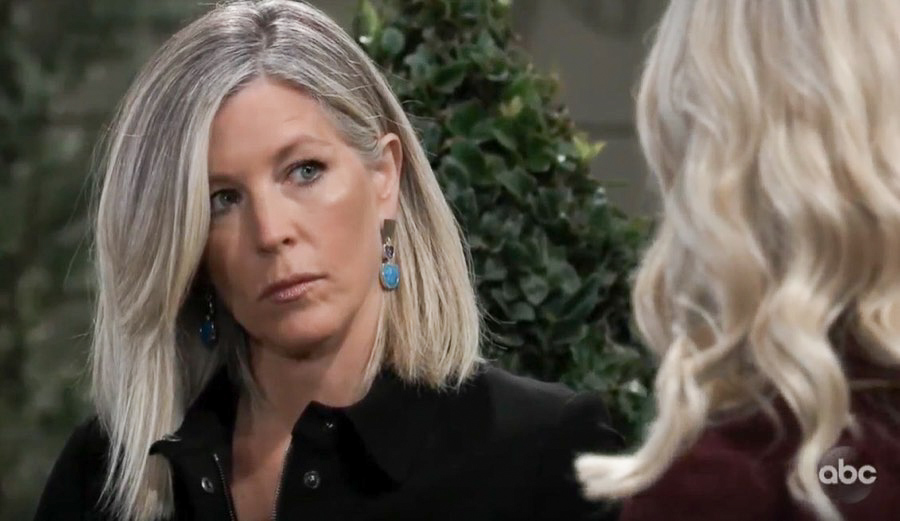 Carly and Nina have talked many times in the last few weeks; there were a couple of times they even sat across from each other at tables. Nina has been wearing her half-heart necklace constantly since she made the decision to find her child, who she has more recently allowed for being a son as well as a daughter. She had previously assumed her child was female because of the necklace but has realized that perhaps the child could be male just as well since the style could be considered unisex.

Carly certainly must have known the significance of the necklace, since Sasha Gilmore (Sofia Mattsson) once wore one Nina had made to match hers as well. After all, Sasha had been involved with Michael Corinthos (Chad Duell) for quite a while, including before she was exposed as a fraud hired by Valentin Cassadine (James Patrick Stuart). In all this time, has Carly never noticed Nina’s necklace?

Has she been so distracted by other things that she never noticed Sasha’s either? Even when she found out that Nelle Benson Jerome (Chloe Lanier) was the little girl (Willa Rose) she never noticed living with Frank Benson (James Patrick Stuart in the flashback scenes) she never remembered her wearing a half heart necklace!

Viewers will recall that between the time that Nelle went missing and her body was found near New Hanover, Pennsylvania that Ava Jerome Cassadine (Maura West) spent a night in the Corinthos cabin. She had an overnight with her daughter Avery Corinthos-Jerome (Ava and Grace Scarola) during Mike Corbin’s (Max Gail) funeral. Avery slipped out of the cabin to take a walk in the woods, scaring Ava and Nikolas Cassadine (Marcus Coloma) half to death!

They found her but failed to notice that Avery had found a “good luck charm” in the woods. It was Nelle’s half of the necklace. Sonny Corinthos (Maurice Benard) saw Avery with it, and she said she found it but not where. He was distracted by his father’s death, and didn’t ask much about it but said it was pretty. Avery said she was keeping it for a “good luck charm” – which is odd in itself since Nelle referred to it as her “good luck charm” as well. As yet, no one has made any connection. Avery put it in her backpack.

However, there is a good chance that Carly will need to put something in Avery’s backpack and will discover the necklace. Carly will realize this necklace isn’t just a trinket, it’s an expensive piece of jewelry – unlike Sonny, who didn’t pick up on that fact. If he did, asking Avery if her mother got it for her, he didn’t pursue it further.

She undoubtedly will ask where Avery got it and Avery will maybe spill the tea that she found it in the woods outside the cabin. Will Carly realize it looks like it matches Nina’s and realizes Nelle was in the woods and finally figure it out? Since she and Nina have become close as of late, Carly certainly would struggle for closure if she realizes Nelle might be Nina’s child and she didn’t try harder to save her!