General Hospital (GH) spoilers tease that Alexis Davis (Nancy Lee Grahn) and Dr. Neil Byrne (Joe Flannigan) continue to blur the lines between their personal and professional lives. Neil was recently brought up before the Board of Ethics because of being an improper relationship with a client, specifically Alexis. 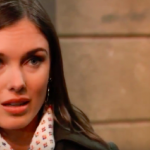 The night before the Ethics Committee convened, Alexis and Neil found themselves in the same box at the opera. Emotions soared and before long they were in Alexis’ hotel room, where they made love. Alexis and Neil didn’t stop seeing each other until they ended their professional relationship, the Ethics Board requires a therapist and his patient not to have a personal relationship for two years following the end of the profession one.

At the Ethics Hearing, Alexis lied about the nature of their relationship so Neil could continue his practice. While Neil wasn’t completely on board with this decision, he chose to follow her lead. But they have agreed to keep their distance from each other. Unfortunately, Alexis’ AA meetings are at General Hospital, and Neil just started working there instead of his own, private practice. Every time they meet it’s awkward, and the of them are obviously not happy about not being able to spend time together.

During a recent argument with her daughter, Samantha McCall (Kelly Monaco), Sam brutally called her mother out for not fighting for Neil the way that she is fighting for Jason Morgan (Steve Burton). Sam immediately regretted her words but it was too late, the damage had already been done. So when the bartender offered her a shot, after a slight hesitation, she downed it. One can only assume that she won’t stop with one.

GH Spoilers – Falling Off The Wagon

If Alexis continues to fall off the wagon, the one person who could probably help her the most is the one person she can’t see. If Alexis and Neil continue to blur the lines of their relationship, it could really damage Alexis and it could mean Neil’s career as well. Neil likely won’t be able to stand by and let Alexis drink herself to death, so things between them will probably become even more complicated?

Will Alexis continue her fall off the wagon. Can Neil, in either his professional or personal role in her life, help her? Should he and should he just let her be? Anything can happen, so stay tuned to General Hospital airs weekdays on ABC. And don’t forget to check back here regularly for all your General Hospital news, information, and spoilers!