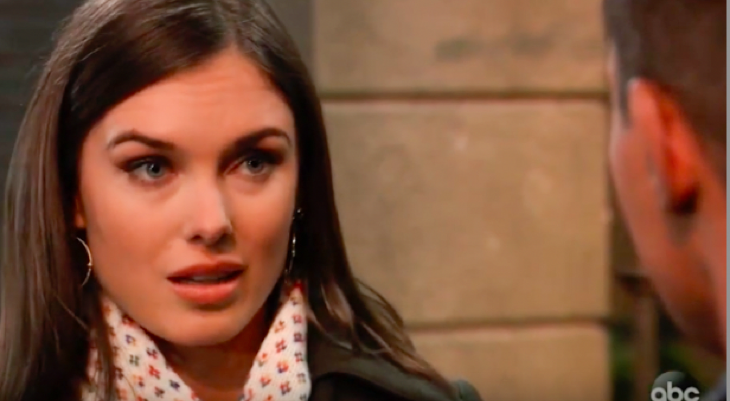 General Hospital (GH) spoilers revealed recently that Jason Morgan (Steve Burton) met up with Willow Tait (Katelyn MacMullen) as she was about to go ice-skating with her boyfriend, PCPD Detective Harrison Chase (Josh Swickard). During their conversation, Jason gave Willow a dire warning!

GH fans know that Willow suspects something weird is going on with her mom, Lorraine “Harmony” Miller (Inga Cadranel). Now, Jason Morgan has warned Willow to be careful. While both Jason and Willow have suspected something wrong and that Harmony’s been hiding the fact that she’s in trouble, it was only recently that Jason figured everything out. As GH viewers know by now, Jason discovered that criminal mastermind, Cyrus Renault (Jeff Kober), is blackmailing Harmony. If Harmony disobeys Cyrus’s orders, he’s made sure that Harmony understands it is Willow who will pay the price.

Since Jason is a mob enforcer and understands the kind of tactics used in blackmail, he knows just how much danger Willow is really in. GH fans of Willow can therefore be grateful that Sonny Corinthos’s (Maurice Benard) best friend is looking out for Willow’s safety.

It’s obvious from previous episodes of General Hospital that Willow Tait wants a relationship with Harmony. After all, Harmony is Willow’s mother. However, some GH viewers may agree that the relationship is a strange one. There are not many mothers in the world that would put their daughters through the same kind of abuse that Harmony put Willow through. Most mothers do not push their daughters into having sex with their own boyfriends. Harmony did that to Willow. Some may wonder then, why Willow desires a relationship with Harmony at all!

Still, GH fans know that Willow has been through a lot and maybe she just desperately needs a mother figure. There are some people (like Willow) who will forgive others no matter how much damage has been foisted upon them. Because of the connection, Willow wants with Harmony, GH viewers know that she has been anxious ever since Jason told her something was amiss.

Now that Jason has confirmed that Harmony is in trouble and that Willow’s own life may be in danger, Willow is deeply troubled.

Many people may remember that Willow isn’t the type to just sit around waiting for something to happen. While Willow hasn’t ever appeared to be super aggressive or manipulative like some GH characters, she has decided to try and help where she felt she could. For example, some might recall Willow’s recent visit to Nina Reeves’s (Cynthia Watros) offices at Crimson where she tried to convince Nina to run a feature targeting Nelle Benson (Chloe Lanier).

Now that Jason Morgan has confirmed that Harmony needs help, one must wonder whether Willow will keep herself out of the fray. While Willow asked Jason to help Harmony if he can, it’s entirely possible that she will decide to confront Harmony herself. Willow might demand that Harmony allow her to help (without really knowing or understanding what kind of help she could possibly offer).

Should Willow defy Jason’s advice to stay out of things and to be careful, Willow might just find herself playing into the hands of Cyrus Renault!

General Hospital Spoilers: How Much Truth Was There to Sam’s Cruel Accusations Against Alexis?

The Bold and the Beautiful Spoilers: Don Diamont Shows How to Self-Quarantine – Listen to ‘Dollar’ Bill Spencer During COVID-19 Crisis!