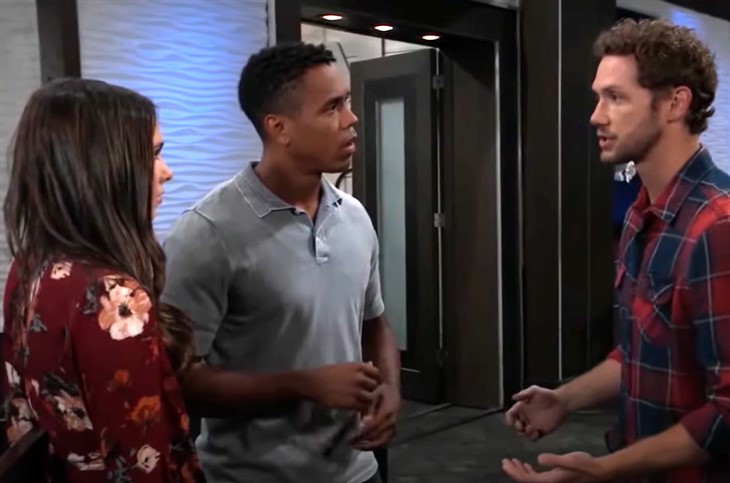 ABC General Hospital (GH) spoilers tease Brando Corbin’s (Johnny Waycross) plan to make Cyrus Renault (Jeff Kober) believe his allegiance has shifted from Sonny Corinthos (Maurice Bernard) to Cyrus may happen sooner rather than later. And the protest that is planned by Molly Lansing-Davis (Haley Pullos) and TJ Ashford (Tajh Bellow) might be Brando’s opportunity to prove his loyalty. Brando may inform Cyrus about Molly and TJ’s plans and that good lead to all kinds of complications?

Brando had previously agreed to attend the protest but he cautioned TJ and Molly not to cross Cyrus because Cyrus is very dangerous. But his warnings went in one ear and out the other to the idealistic young couple. Brando initially agreed but after Molly asked Brando to back off because his presence made Molly uncomfortable since they recently slept together when Molly believed TJ had broken up with her. So if Brando shows up with Cyrus at the protest, tipping the drug kingpin off, TJ and Molly will likely feel betrayed.

GH Spoilers – Cyrus Renault May Task Brando Corbin With Stopping The Protest By Any Means Possible.

It seems likely that Cyrus will task Brando with “taking care” of the protest by any means necessary. He will imply that harm should befall both Molly and TJ if the protest takes place. If Brando finds himself in the position to have to threaten TJ and Molly if the protest takes place. Cyrus may not have the patience for anything that could get in the way of his plans for Port Charles. If Brando can’t convince them to leave Cyrus alone, Cyrus might become violent.

General Hospital Spoilers -TJ Ashford Has Already Been Kidnapped Once

When Cyrus was still in prison, his men kidnapped TJ in order to get Jordan Ashford (Brianna Nicole Henry) to find a way to get Cyrus out of jail and exonerated. TJ was beaten badly during this experience so he knows firsthand how dangerous it could be to mess with Cyrus, and yet he doesn’t seem to be dealing with the trauma which is why he is throwing himself into this protest. Brando could threaten them by reminding TJ he may not be so lucky if Cyrus decides to go after him again.

If Molly sees Brando doing Cyrus’ dirty work, she will be even more horrified that they slept together. She’ll worry that she slept with a criminal. She will likely let Brando have it for keeping his criminal activities from her when they slept together. Of course, Brando won’t be able to let either TJ or Molly know that he’s actually working for Sonny, so until Cyrus is safely behind bars, he will have to let them think the worst of him!

Will Brando tip Cyrus off to TJ and Molly’s protest plans. Will Brando find himself having to threaten the young couple in order to keep them safe. Will this lead to the truth about Brando and Molly’s hookup being found out by TJ? Only time will tell.