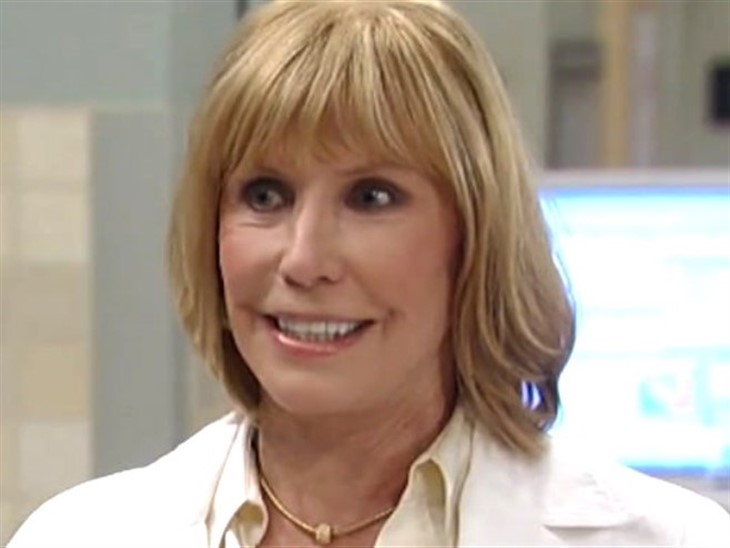 ABC General Hospital (GH) spoilers show Monica Quartermaine (Leslie Charleston) will surprise Brook Lynn Quartermaine (Briana Lane). What does Monica want? Will she try to convince Brook to move back into the mansion?

General Hospital’s Monica loves to remind people that Alan Quartermaine (Stuart Damon) gave her the house. Ned Quartermaine (Wally Kurth) had no right to throw anyone out of the house, even Brook. Monica is likely to remind Brook of this and possibly try to convince her to move back home. Monica knows that Brook did what she had to do to get out of her contract and probably feels she is not to blame.

General Hospital spoilers and rumors reveal Brook feels guilty that Michael Corinthos (Chad Duell) lost his job to Valentin Cassadine (James Patrick Stuart) because she sold her shares but she isn’t the only one. Brook only holds a small part in the loss of ELQ.

Frankly, if her father hadn’t been so worried about keeping control of the company, he would have paid more attention to Tracy Quartermaine’s (Jane Elliot) warning about the takeover attempt. Ned cannot blame anyone but himself for the takeover. Taking out his frustrations on Brook was wrong. Michael doesn’t blame Brook, she shouldn’t blame herself either.

General Hospital’s Brook needs a place to live and she has no income. Monica could offer her money to get a place to live or invite her to come home. However, Monica knows what it is like to be estranged from her children. Monica has had issues with Jason Morgan (Steve Burton) since his accident years ago.

Monica and A.J. Quartermaine (Sean Kanan) had issues because he thought Jason was the favorite. Monica and Emily Quartermaine (Natalia Livingston) had issues over some of her significant others. However, Monica has always been willing to help her children even when they disagreed. Monica hid A.J. for years after he tried to kill Jason and kidnap Michael years ago.

General Hospital’s Monica is still close to the hospital staff even though she no longer works there. Could Portia Robinson (Brook Kerr) or even Elizabeth Webber (Rebecca Herbst) have told Monica that Brook’s vocal cord damage is too severe to be repaired?

Will Monica get through to Brook where no one else has been able to? Will Brook come back home and reunite with her family at Monica’s urging? Could Monica bridge the gap between Ned and Brook?