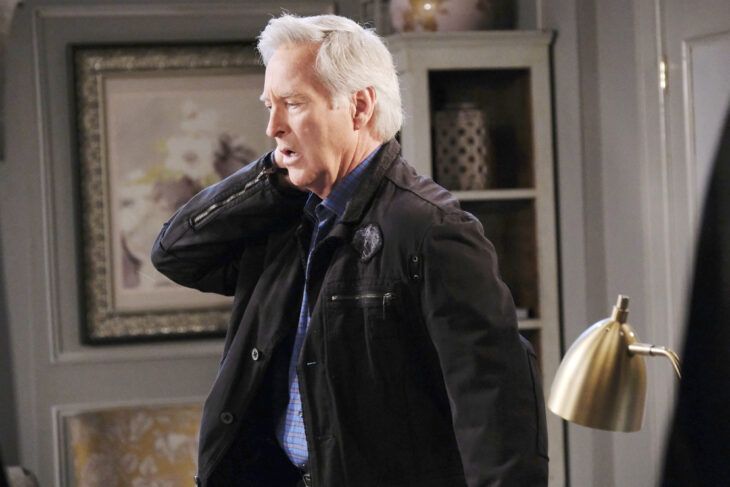 NBC Days of Our Lives spoilers tease that some in Salem are wondering if John Black’s (Drake Hogestyn) personality changes could be permanent.

John Had A Brain Aneurysm That Was Removed

Viewers will recall when John was arguing with Sami Brady DiMera (Alison Sweeney) a few weeks ago, he appeared to clutch his head near his neck in pain and passed out. The medical definition of an aneurysm is a bulging blood vessel – it looks like a little balloon on a stick, the stick being a vein.

It sounds like his aneurysm must have been in the area where he clutched his head. Since the aneurysm was repaired, he has developed a different personality – a combative one! John doesn’t even understand why he loses his temper or reacts the way he does; he’s usually so calm and laid back! It sounds like the aneurysm damaged the part of John’s brain responsible for impulse control and emotions. Some soap operas have had murderous characters who changed once tumors were removed from the frontal lobe, but that is not the only place in the brain responsible!

There are structures all over the brain contained within the limbic system, including the amygdala, of which there are two, one each side that controls impulses and emotion. From where John clutched his head, it appears that one of the amygdala has been damaged and is malfunctioning, causing him to have some loss of impulse control and anger issues.

Anger And Frustration Are Common In Patients Recovering From Brain Aneurysms

Brain aneurysms are sometimes referred to as hemorrhagic strokes, and anger and frustration are common in patients recovering from them. Memory loss is also common, although John recovered from his quickly. However, the anger and frustration may take longer to heal. The right hemisphere of the brain and its associated amygdala is responsible for negative emotion, and John did clutch the right side of his head before passing out on the floor. Luckily, Sami just didn’t leave him there and her mother Marlena Evans (Deidre Hall) arrived soon after he fell.

Days Of Our Lives Spoilers: Eli Begs Kristen To Confess, Lani Won’t Forgive Him If DA Gets Secret Tapehttps://t.co/fFqoRhptvN

He received medical attention in time, or his outcome could have been much worse. Still, in a hemorrhagic stroke, even a small delay in treatment and surgery could make a huge difference! Marlena, as a psychiatrist, knows that his personality change is not due to anything mental but to what happened to him physically. But how long will he be like this?

The Days of Our Lives extended weekly preview shows him slugging Tripp Dalton (Lucas Adams) off his feet in anger for Allie Horton’s (Lindsay Arnold) rape! Steve Johnson, (Stephen Nichols) his partner in Black Patch and Tripp’s father literally has to pull John back! Whether John’s temper and lack of control are permanent or temporary depends on the amount of damage to his brain and if it’s permanent or temporary. Marlena may find herself having to force her husband into an anger management course!