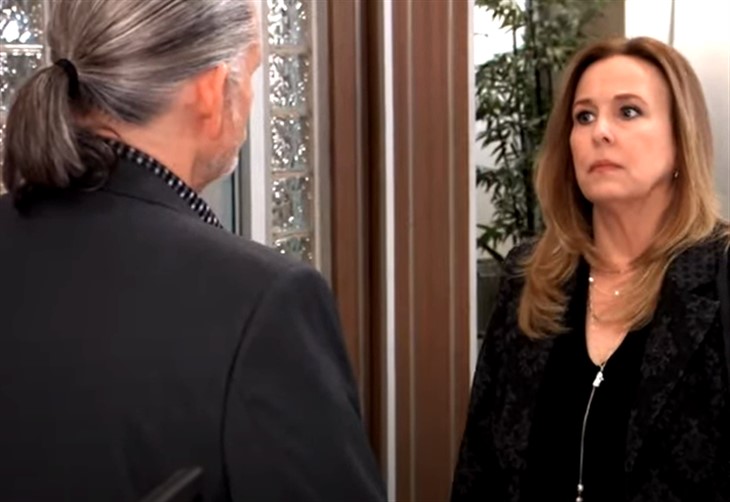 General Hospital spoilers and updates reveal in Port Charles, NY Laura Collins (Genie Frances) has just learned that Cyrus Renault (Jeff Kober) is not only her brother but that he killed their father. General Hospital’s Spoilers indicate that Cyrus will suggest to Laura that they are very much alike. Laura may argue the point at first but is Cyrus right?

General Hospital Spoilers – Cyrus Renault Claims It Was An Accident

General Hospital’s Cyrus later became a drug lord, one that was so good that evidence against him had to be manufactured. Cyrus is also behind the bombing that put his niece in a coma. Laura has called Cyrus out on harming her daughter, something he says was never intended, but who sets off a bomb in a restaurant full of people? Cyrus knew when he had Julian make that call that the Floating Rib was full of people. Jason Morgan (Steve Burton) was not his only target, Cyrus almost caused Julian Jerome (William deVry) to almost kill his own grandson as well. But Cyrus’ backstory includes his bad childhood and that is apparently his point of redemption.

General Hospital Spoilers – Laura Collins Was Given Away

General Hospital’s Laura was given away as a child. Cyrus had to find his own way with gangs or whomever he could to get buy. Cyrus wanted control of his life after feeling abandoned by his mother. Laura’s childhood was quite similar. After all, Laura has killed a time or two herself by accident. Will this connection make Laura feel sorry for her brother and want to help him now that his past has been exposed? Will Laura go against her own police commissioner to help her brother get a fresh start?

General Hospital rumors suggest that Laura will defend her brother and try to clear his name. Does Laura feel sorry for the teenager who was abandoned? Could she possibly forgive the man who put her daughter in a coma? Now that Julian is dead, will Laura blame the bombing solely on him and try to save her brother?