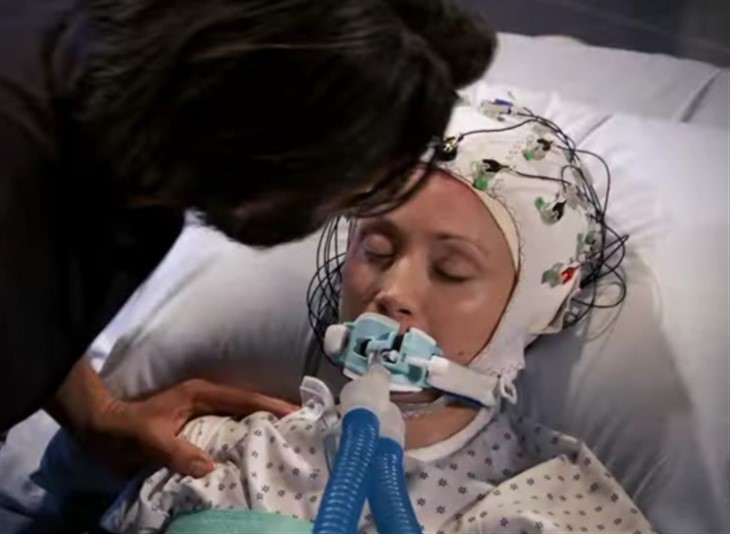 General Hospital (GH) spoilers tease that in Port Charles, NY Lulu Spencer (Emme Rylan) will remain in a coma “indefinitely,” and the show reserves the right to bring her back. The timing of her coma is heartbreaking, as she and Dante Falconeri (Dominic Zamprogna) decided to fight for their relationship.

The biggest question on GH viewers minds is if the ABC soap opera will recast the role or bring Emme back. At this point, it is anyone’s guess what the showrunners will choose to do, as the fans were stunned that she exited the show.

Currently, on General Hospital, Lulu is in a coma and her mother had to make the heartbreaking decision to move her to a long-term health facility. This, of course, was gut wrenching for Dante, as the once happy couple were just starting to realize they belonged together.

It’s only natural that Dante is angry with himself for wasting so much precious time with her. He thought they had more time, and to find out that she may never wake up, was a tough thing to accept. Many General Hospital viewers believe that they will be either bringing Emme back or recast the role, since they didn’t kill off the character.

Rylan revealed that she didn’t expect to leave the show. She loved playing Lulu, and she would never voluntarily leave the show. Considering that Emme exited the show, and it wasn’t her choice, many GH fans assume that the show would probably recast the role.

The fans would be excited to see Lulu back on the show, whether Emme returns or if they hire a new actress. Her character creates balance on the show, and the show will not be the same without her.

Rylan revealed that she will enjoy her time with her family during her unexpected time off. She headed east with her family and said that she will be there “for an extended time.” Many GH viewers took that to mean that she doesn’t expect to return to the show. But as most soap fans know, they can hope that the showrunner will bring her back soon.

With Lulu gone, Dante will have to learn to accept that she’s gone for now. It won’t be easy for him, but maybe he’ll find comfort with a new woman. Do you want Emme Rylan to return as Lulu? Would you support a Lulu recast?

The Bold And The Beautiful Spoilers: Liam Unravels Over Thomas – Sets The Stage For Shocking Bombshell