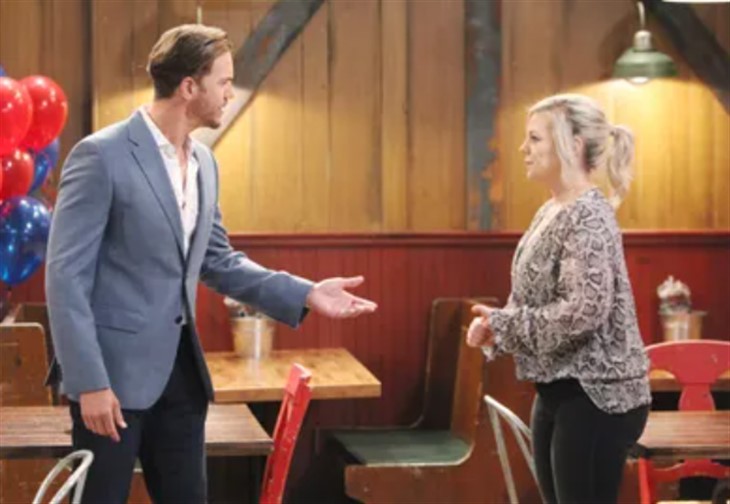 General Hospital (GH) spoilers tease that Peter August (Wes Ramsey) and Maxie Jones (Kirsten Storms) are over the moon with the revelation that they are having a baby girl. The two of them see nothing but happiness coming their way, but Damian Spinelli (Bradford Anderson) will take the gender reveal as a sign that the clock is ticking in his quest to send Peter to jail. Once the baby is born, it will be that much harder for Maxie to get Peter out of her life and Spinelli well aware that the window of opportunity is dwindling.

General Hospital spoilers show Peter has so far managed to cover his tracks. His bag of tricks have included having Drew Cain’s (Billy Miller) plane go down, leaving Drew presumed dead; he also framed Leisl O’Brecht (Kathleen Gati) for his crimes and ordered hits on Andre Maddox (Anthony Montgomery) and Franco Baldwin (Roger Howarth) even though he later changed his mind about the last one. But Peter is well aware of Spinelli’s mission.

A not so subtle threat

After Spinelli and Samantha McCall’s (Kelly Monaco) last attempt to get the goods on Peter, by faking the voice of Helena Cassadine (Constance Towers) in phone calls to Peter; Peter threatened Spinelli. He made it clear that he would have no problem killing the computer whiz if he didn’t back down. That won’t likely stop Spinelli, but he will certainly have to very careful how he approaches his next move. Peter wasn’t messing around when he told Damian that he would have no problem getting rid of him. And given Peter’s history, Spinelli has every reason to believe it.

Unbeknownst to Spinelli, General Hospital comings and goings spoilers show Dante Falconeri (Dominic Zomprogna) has returned to Port Charles with one mission, and that’s to take down Peter for his crimes. Dante is still brainwashed, and may not be the most stable of partners but if Dante and Spinelli realize they are working toward the same goal, perhaps the both of them can accomplish what neither of them has been able to do alone. Perhaps they can bring Peter to justice before his and Maxie’s little girl is born.

Should Spinelli stay out of the situation with Peter before he is Peter’s next victim? Can Dante and Spinelli even think about teaming up or are they like oil and water? And will Peter ever have to pay for his crimes? Justice is slow sometimes in Port Charles, so stay tuned to General Hospital airing weekdays on ABC. And don’t forget to check back here regularly for all your General Hospital news, GH episode information and new spoilers.