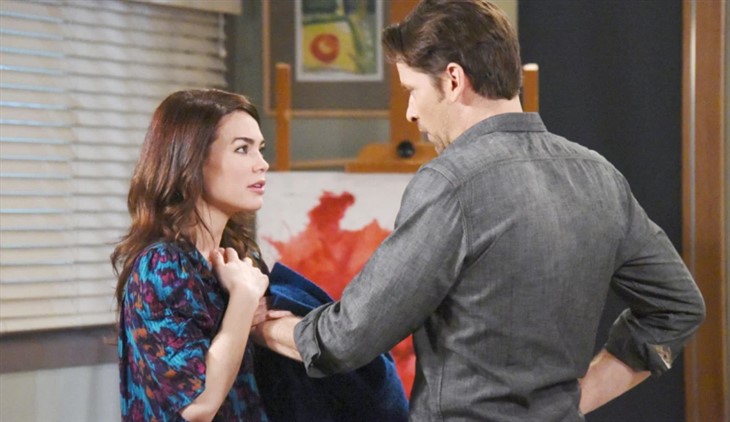 ABC General Hospital spoilers and rumors suggest that Elizabeth Webber Baldwin (Rebecca Herbst) could be ready to call things quits with Franco Baldwin’s (Roger Howarth) is she believes he’s working on a dalliance with Ava Jerome (Maura West). GH fans know this isn’t likely to happen since Franco appears completely devoted to his wife. Yet, everyone knows Elizabeth has a wild temper and she’s already nursing a grudge against Franco.

Now, for those who don’t recall, Franco and Elizabeth have been experiencing bad financial issues. Franco’s barely bringing in an income and Elizabeth’s salary as a nurse at General Hospital just isn’t cutting it. While Franco and Elizabeth evidently have been able to bring in enough cash to keep them afloat, they’re not able to afford anything extra. In fact, GH fans might recall that Franco was super depressed with his head practically in his hands as he looked at bills and considered the need to save for Cameron Webber’s (William Lipton) college education.

When Franco hit upon the idea of allowing Ava Jerome to help him revamp and revitalize his art career, Elizabeth was against it. That’s because Elizabeth was horrified to learn that Ava’s plan was to remind the press just how evil Franco used to be … and then portray him as an evil, mad genius when it came to art. That entire notion left Elizabeth with a bad taste in her mouth as it would put the wrong kind of media attention not only on Franco but on his entire family as well.

Now, with the financial issues and the potential to have their entire family’s reputation blown to hell, Elizabeth isn’t a happy camper right now. She may not be ready to divorce Franco yet … after all she seems to love him as much as he does her. Yet things could change at the drop of a hat if Ava’s tender affections were added to the list of things Elizabeth is currently holding against Franco.

Indeed, GH fans have to wonder what might happen if Elizabeth were to walk in on Ava burying her head in Franco’s chest, clutching onto his shirt collar, apparently ready to kiss him passionately …

Of course, the reality would likely be a lot more innocent than that. GH viewers have watched as Franco’s tried to comfort Ava in the past. That’s especially true after Ava’s had loud and mean verbal spats with her loveless husband, Nikolas Cassadine (Marcus Coloma). However, even when others might take advantage of a situation wherein an attractive woman is completely pressed up against their bodies … Franco has remained the ultimate gentleman.

It’s still a fair bet that Elizabeth might not see things that way.

The truth is, while many feel the powers that be are trying to work out a way to break Franco and Elizabeth up, that’s not actually what a lot of GH viewers want.