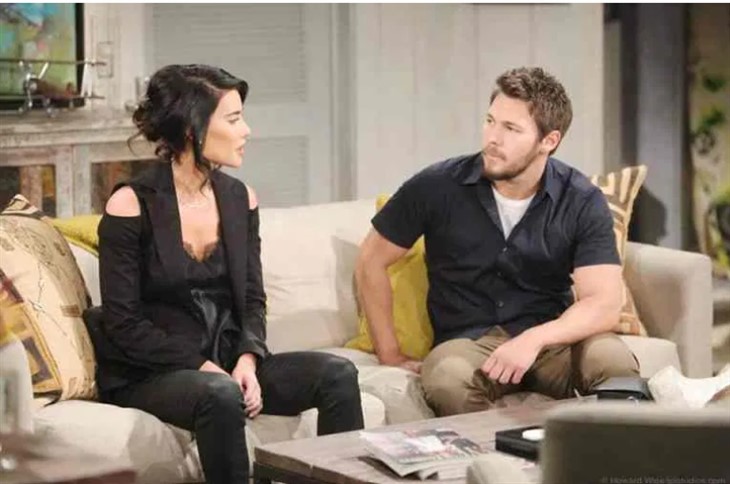 CBS The Bold and the Beautiful spoilers tease that Liam Spencer (Scott Clifton) may be leery of Steffy Forrester’s (Jacqueline MacInnes Wood) seeming new love interest, John Finnegan (as played by the just cast Tanner Novlan). Steam evaporated as a couple in the past. But the seeming pairing of Wood and Novlan’s characters is likely to create a response from Steffy’s greatest love.

In a confirmed new direction, a new man will be written into Steffy’s life. B&B’s resumption of production in the latter part of June and ongoing filming schedule indicates that new shows will soon be broadcast and with that, Steffy, John, Liam, and the other residents of this fictional version of Los Angeles, California, will soon be seen.

Liam is in love with Hope Logan (Annika Noelle). However, he also retains a place in his heart for Steffy, who is the mother of his daughter, Kelly Spencer (Avalon and Colette Gray).

Lope’s solid status apparently includes this couple formalizing their remarriage in the days that followed the fun ceremony Douglas Forrester (Henry Joseph Samiri) officiated at the cabin. Yet Liam’s permanent tie to Steffy through Kelly will keep Clifton’s character on alert regarding the man Wood’s character will get to know.

One of the enjoyable elements in the daytime that developed during the rise of social media within the last handful of years is the emergence of the couple’s nicknames. Hashtagged monikers fuse parts of one person’s name with the other to create a memorable way to reference a pairing.

John’s last name can be used as a nickname on its own, as Finnegan has long been known to be shorted to Finn, or Fin. Attach the first two letters of Steffy’s first name, which is a nickname for Stephanie, and the longer version of John’s last name nickname to produce Stinn.

Among other alternatives, the first letter of John’s first name could be combined with the last four letters of Steffy’s nickname to produce Jeffy.

The Bold And The Beautiful Spoilers – Impact On Kelly Spencer

The manner in which B&B will write John into the show is a mystery for now. It’s possible that a health issue will serve as the opener for Novlan’s character to be introduced, as John is a doctor.

Steffy or Kelly could need some form of treatment. An urgent need would fit with soap opera tradition.

Liam’s interest would be immediate if Kelly is affected. However, if Steffy is impacted, then Lope might need to care for Kelly while her mother is treated by Dr. Finnegan. Many other possibilities, including John serving as a therapist, could also be used to weave this new character into the show and provoke Liam’s concern in various ways.