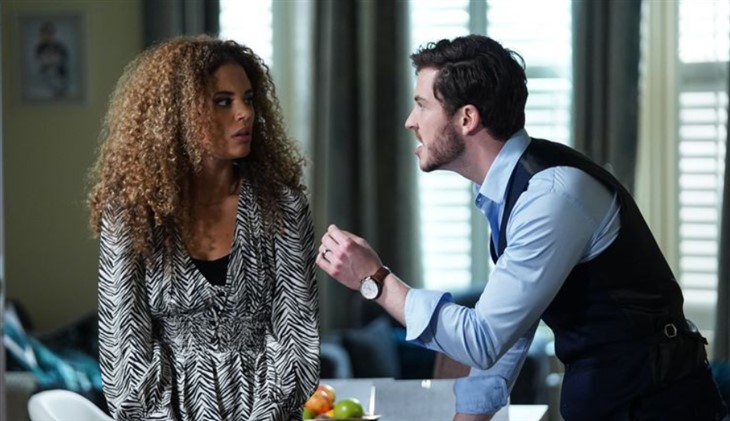 BBC Eastenders spoilers reveal that the soap is currently on hiatus and is supposed to come back this September. When it does finally air new episodes, could we see a double death shocker? Keep reading to find out who the victims could be and what is speculated about the storyline.

As fans know, Chantelle Atkins (Jessica Plummer) is the victim of domestic violence. She has been emotionally, mentally, sexually, and physically abused by the man who is supposed to love her. The last time she had a beating, she could barely get up without using the counter for support.

Walls Are Closing In On Gray Atkins

Eastenders spoilers indicate that two different women have called Gray Atkins (Toby-Alexander Smith) out for being the jealous type: Dotty Cotton (Millie Zero) and Suki Panesar (Balvinda Sopal). Dotty couldn’t help but notice Gray’s car had a tracker in it. As for Suki, Gray thought he could get rid of Chantelle’s job in order to isolate and control her. However, Suki wasn’t making it that easy for him.

It is clear that Gray is getting close to exploding again. He keeps pushing the cheating theory on Chantelle, even though she has proof she didn’t take the car. It seems that Gray knows his wife is telling the truth, but then he wouldn’t have an excuse to brutalize her. He always seems to need a “reason” to beat Chantelle. It is also clear to see from his clenched jaw and tightened fists that he plans on hurting his wife soon.

Add to that the fact that domestic violence gets worse during lockdowns and Chantelle could be in real trouble.

According to Express, there is a chance that Chantelle isn’t the only one in danger. Could she try to fight back and kill her attacker before taking one last breath herself? Or will Gray commit a murder-suicide after realizing that he has murdered Chantelle and there is no way out of prison?

What do you think is going to happen with Gray Atkins when new episodes return? Could he kill Chantelle, will he be the one to die, or is a murder-suicide possible? The soap wouldn’t kill off a victim after months of fans waiting for justice, would they? We won’t know anything for certain until new episodes air again this fall, so we’ll just have to be patient.