General Hospital Spoilers: Alexis Confessed to Perjuring Herself & Falling Off the Wagon – Will She Lose Her Law License? 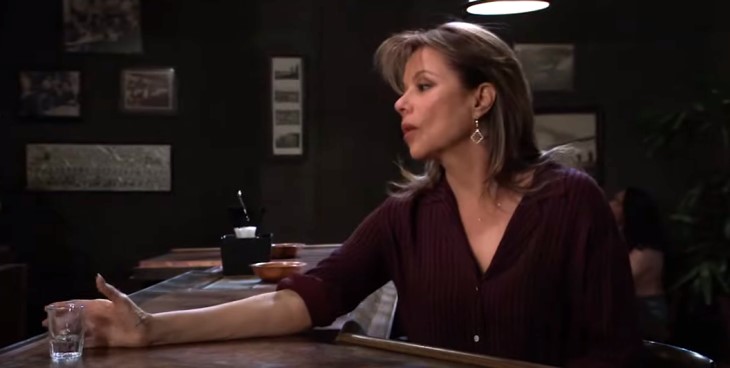 General Hospital (GH) spoilers revealed that Alexis Davis (Nancy Lee Grahn) was ambushed by her “bestie,” Diane Miller (Carolyn Hennesy) for an ad-hoc intervention. GH fans know that not long ago, Alexis, who is an alcoholic, found herself in a bar where she took a drink. Now, Alexis’s friends are afraid for her.

GH viewers who have been watching a while know that not long ago, Alexis came to the aid of her daughter, Sam McCall (Kelly Monaco) and Sam’s geeky friend, Damian Spinelli (Bradford Anderson). Spinelli had been doing his best to tail Sam’s parole officer in order to get some kind of dirt on her. Everyone knows that Sam intended to use whatever information that Spinelli dug up to blackmail Dolores Maloney (Andi Chapman).

With that said, both Sam and Spinelli got caught, and Sam ended up having to call Alexis to come and negotiate their release. Of course, Alexis dropped what she was doing and drove out to the seedy bar where Maloney was holding Spinelli and Sam. While Alexis was successful in getting Maloney to back off, the terms she agreed to angered Sam. GH fans know that Sam ultimately went on a long rant where she castigated Alexis for a multitude of perceived wrongs.

The bottom line was that Sam’s words cut Alexis to the core and in a moment of weakness, GH viewers saw Alexis take a shot of vodka that was offered to her.

Now, everyone knows that Diane was only trying to make sure that Alexis was okay. She couldn’t be there to watch over Alexis and make sure she doesn’t chug a bottle of vodka or three. That’s why Diane brought Sam in on the case. During the entire meeting, it was made clear that Sam had no idea what her mother had done. Sam was in shock and clearly became worried when Alexis confessed that she’d had a drink. The two women have not seen eye to eye on many issues, but deep down GH fans know that Sam loves her mother.

What disturbed Diane and Sam, however, was the fact that Alexis admitted to perjuring herself before the medical board. Alexis lied to the ethics committee about her night of passion with Dr. Neil Byrne (Joe Flanigan). Of course, this flabbergasted Diane to no end. Didn’t Alexis know she could be disbarred? She should, Alexis lost her ability to practice law once before and now here she was tempting fate once again!

By the time that Diane left the Metro Court, it was clear that she believed some bumpy nights might be ahead for Alexis. Some GH fans breathed a sigh of relief though because Sam definitely isn’t a stranger to difficult times. It’s likely that viewers can expect a hyper-vigilant Sam to check up on Alexis.

While Alexis might not appreciate it at first, the truth is that Alexis needs people she can turn to when things become emotionally difficult. GH viewers might agree that while Alexis might want to turn to Neil, there’s absolutely no guarantee the man’s going to be there for her if he really ends up losing his medical license over their one-night