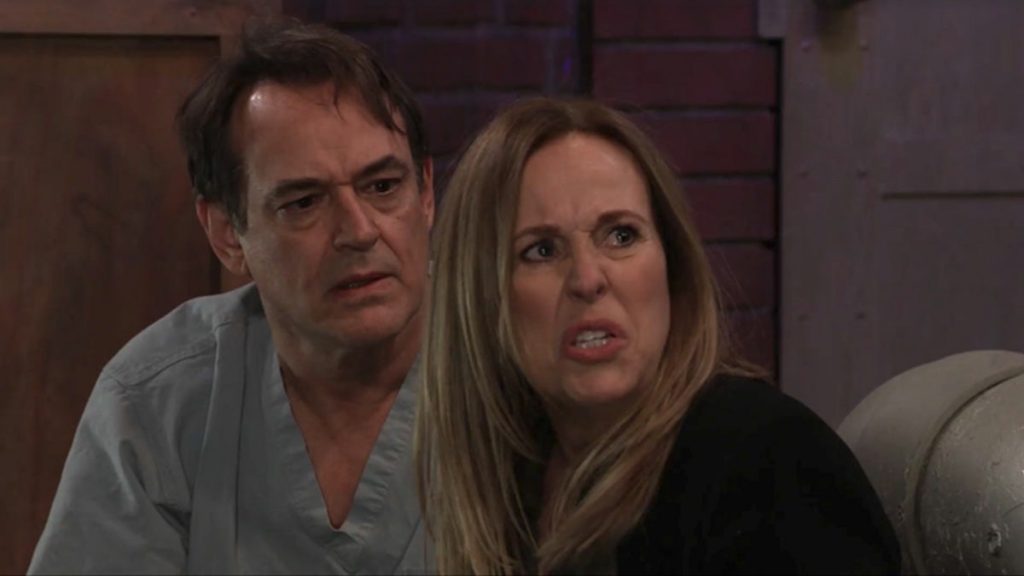 General Hospital (GH) spoilers tease that Ava Jerome (Maura West) and Nikolas Cassadine’s (Marcus Coloma) sudden marriage will be anything but a typical union. This was more of a business arrangement than anything else. Laura Collins (Genie Francis) tried to talk them both out of a loveless marriage but it fell on deaf ears with both of them.

Ava found the codicil that Nikolas had been searching for but would only hand the document over to Nikolas if he agreed to marry her. The day after the wedding, Ava indicated that she would have a contract written up as a kind of post nuptial agreement. Ava was also a bit concerned about being alone with Nikolas, which is why she asked Leisl O’Brecht (Kathleen to remain at Wyndemere.

Leisl agreed to stay, at least temporarily. But she doesn’t really care for either Ava or Nikolas so there’s no telling how long she will remain. But there is someone else that Ava knows would make sure Nikolas doesn’t try to harm her . If there is one person who brings out the better side of Nikolas, it’s his mother. And Ava and Laura have formed sort of a friendship in the last year

GH Spoilers: Would agree to move to Wyndemere?

But would Laura agree to move in Wyndemere even on a temporary basis? Laura was quite dismayed at Nikolas’ actions. Laura may feel that without her influence for the past three years, Nikolas’ Cassadine traits have taken over. So perhaps her presence now could help temper his dark, Cassadine aide, She won’t want to see either Nikolas or Ava get hurt but also to keep Nikolas from going so far down a dark path that he can’t see his way back. And even though she can’t believe some of the things Nikolas has done, after three years she’ll likely want to spend as much time with him as she can. So don’t be surprised if Laura and her husband, Dr. Kevin Collins temporarily relocate to Wyndemere.

Does Ava have anything to fear from Nikolas? Will Dr. O’Brecht leave now that Nina Reeves (Cynthia Watros) has left Wyndemere, and Valentin Cassadine (James Patrick Stuart). Will Laura agree to move in there in order to help Ava and Nikolas from doing any more harm to each other? Anything can happen, soystay tuned to General Hospital airing weekdays on ABC. And don’t forget to check back here regularly for all your General Hospital news, information and spoilers!