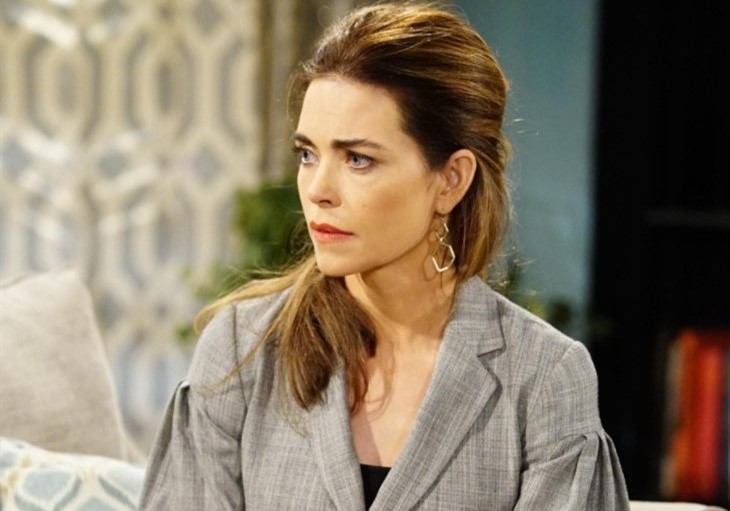 The Young and the Restless spoilers document that Victoria Newman (Amelia Heinle) currently holds the top spot at Newman Enterprises, but is ready for the next battle that hasn’t yet emerged. Victor Newman (Eric Braeden) wants his first-born child to lead the company, while he’s also attempting to help Adam Newman (Mark Grossman) heel.

Y&R fans will closely watch an unfolding scenario where Adam eventually gains mental stability and then is offered the opportunity to prove himself once more. Yes, it’s fair to project a seemingly rebalanced Adam, who’s given a shot at redemption by his father with a job inside the family business.

The Young And The Restless Spoilers – Redemption Cited In Opportunity

Victoria might be thinking that Adam isn’t a threat at the moment, and she’s right. He’s currently confined in a mental health facility and is a long way from being able to be released, let alone provided with a busy-work job at Newman.

Whether Adam fights the doctors, tries to escape, actually does, or whatever, Y&R appears to be positioning the current recast of this legacy character for something different in the near future. Writing a legitimate redemption storyline would allow this very strong actor to further exhibit his chops.

Victoria doesn’t have the time, or energy to watch her little brother. However, Victor wouldn’t see it like that in this projected storyline.

Adam would be the guy who doesn’t deserve a break but can be given one as a reward for convincing his father that he really does want to be part of the family. In order for that conviction to take hold, he’ll likely need Chelsea Lawson’s (Melissa Claire Egan) full endorsement, with a wink from Sharon Newman (Sharon Case), who could be Sharon Rosales by that time in the plot.

Heinle’s character, along with her other brother, Nick Newman (Joshua Morrow), won’t be inclined to give Adam an inch. But Nick refuses to work at Newman, so Victoria will be forced to keep an eye on whatever Victor wants Adam to do.

The Young And The Restless Spoilers – Crisis, Rather Than Duplicity Changes The Game

Traditionally, Adam would either turn back to the dark side or be seen as doing so, while gaining greater prominence within the family business over time. But a better storyboard would have Victoria experience a crisis that enables Adam to help her while she’s distracted, or unable to meet her obligations.

Victor would be impressed by Adam’s performance and choose to elevate his role at Newman. Whether Victoria would remain the Chief Executive Officer, or quit, which would allow Adam to take the helm, can be written as the conflict in this telegraph of the future in Genoa City, Wisconsin.