General Hospital viewers will recall from Friday’s episode that Valentin Cassadine took advantage of a “photo opportunity” while at the Metro Court after he had cornered Lucy Coe (Lynn Herring) attempting to make a deal with her, but one that would cost her the deal she had previously made with Crimson Magazine. 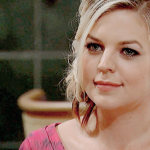 Then, something caught his notice; and his devious mind started working overtime, and he immediately turned on his cell phone camera to video this unexpected event; Lulu Spencer and Brook Lynn Ashton in the catfight to end all catfights!

Lulu had been trolling Brook Lynn’s Facebook page, and caught a viral post; Brook Lynn had videoed her desktop at the ELQ offices, which she had just bought new décor for including a sparkly gold paperweight; which was resting right on top of an ELQ subsidiary contract with Merton Medtech which was for her eyes only, and Invader reporter Lulu took advantage of an opportunity for a scoop, and wrote the video up for The Invader!

As a result, the potential client backed out of the deal, and Brook Lynn was in big trouble with Daddy Dearest, otherwise known as Ned Quartermaine (Wally Kurth)! Brook Lynn saw Lulu in the Metro Court, and she went to have it out with her!

Valentin saw the girl fight of the century taking place before his eyes, and gasped and immediately started filming on his cell phone! Before he got there, Lulu had started it with opening a bottle of champagne and giving a Brook Lynn a shower in it, and then at the point, Valentin noticed, they were brawling, grabbing each other by the hair, slamming each other into tables, which knocked the tables over, and pretty soon it was several tables and several body slams!

Valentin couldn’t believe his good fortune – these were the exact two women who were the biggest problems in achieving two of his main goals – buying more ELQ stock, and winning sole custody of his and Lulu’s daughter, Charlotte! General Hospital viewers will recall that Valentin was behind Linc Brown’s (Dan Buran) offer to let Brook Lynn out of his contract with her in exchange for her shares of ELQ stock; and she had turned him down!

Lulu has threatened him that she would report him as an unfit father, and get sole custody of Charlotte and that he would never be allowed to see her or spend time with her again! Now he has leverage over both of them!

After things really got rough, Detective Harrison Chase (Josh Swickard) with a couple of uniformed policemen after him, came to break up the fight, and he was in obvious shock seeing who was involved! He went over to break the two women up and promptly was slugged by Brook Lynn, who just reacted and didn’t see whose nose she may have broken!

General Hospital Spoilers: Peter Villain Reveal About To Blow – Will Finn and Anna Make It Down The Aisle? #gh #GeneralHospital https://t.co/m4pvgRU560

He hauled her off to jail and made it clear to her “no more Mr. Nice Guy!” Valentin will have to come to see her in the Port Charles Jail, possibly arranging bail for her and calling his attorney, Martin Gray (Michael E. Knight) to represent her before she makes her one phone call to her father for help!

He will find out soon enough, since his wife, Olivia Quartermaine (Lisa LoCicero) owns half of the Metro Court with Carly Corinthos (Laura Wright)! He will use the cell phone video to blackmail her shares of ELQ out of her, at threat of making it go viral! As far as Lulu, he’ll bide his time until the custody hearing comes up and show his “scoop” to the family court judge there!