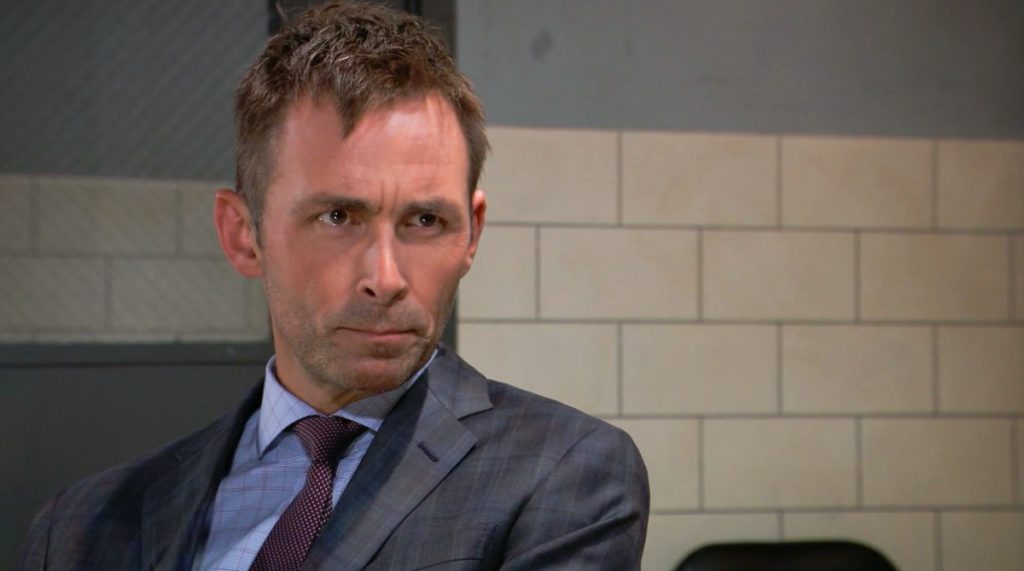 General Hospital spoilers tease that Valentin Cassadine (James Patrick Stuart) is out for blood, and goes after Jasper “Jax” Jacks (Ingo Rademacher) at the Aurora Media offices and kills him right in front of his daughter, Josslyn Jacks (Eden McCoy) and Dustin Phillips (Mark Lawson) in an upcoming episode of GH; but is this a vengeful daydream on the part of Valentin, or a nightmare? If it’s a nightmare, whose is it?

GH Spoilers: Valentin Cassadine Could Be Having A Vengeful Daydream

General Hospital viewers can easily imagine Valentin having a vengeful daydream like this if he finds out that Nina Reeves (Cynthia Watros) is moving on with Jax! But what is Dustin doing in his dream, and why is Joss at her father’s office at work? It is possible they may be having a parent-student-teacher meeting in Jax’ office at work, but those usually take place at the school. Valentin wouldn’t include Joss and Dustin in a daydream where he takes down Jax, so it’s not likely to be his daydream. That’s not to say he may not want to take his romantic rival down!

General Hospital Spoilers: Lulu Spencer May Be Having A Nightmare

This could easily be a nightmare Lulu would have! She just recently had a talk with her mother about her worries about becoming serious with another hero! Lulu is also battling Valentin for full custody of their child, Charlotte Cassadine (Scarlett Fernandez) and views Valentin as a criminal of the worst sort, even though he has proven to be a good father to Charlotte, and an adored one at that! She could have a nightmare about Valentin trying to murder someone, and she undoubtedly knows about the budding romance between Jax and Nina from her best friend Maxie Jones (Kirsten Storms) who couldn’t keep a juicy secret like that! She would see Dustin trying to be a hero and possibly jumping in the line of fire trying to protect Jax – it’s unsure why she would dream about Joss being there, however, unless it is just part of the villainy of Valentin in Lulu’s mind, her being positive that he’s evil enough to murder a father in front of his daughter!

It’s also possible that Carly Corinthos (Laura Wright) might be having a nightmare – even if she is positive that Joss would be more safe living with her father, she is also of the opinion that Valentin is a villain, although the Corinthos family is not usually directly affected by him. She was smack in the middle of the secret of Nikolas Cassadine (Marcus Coloma) being alive, and having to keep it a secret, and Jax was smack in the middle of having to keep it a secret with Nikolas living at his house! She is worried about everyone’s safety after the mob attacks that happened, although she would be more likely to have a nightmare about Joss being killed by one of Cyrus Renault’s (Jeff Kober) men.

Could This Be For Real? Will Dustin Phillips Play The Hero Again?

Of course, there is the possibility that this scene in the GH weekly preview “Rivalries” is for real! Valentin just found out that he’s not a Cassadine, and that Helena Cassadine (Constance Towers) must be his mother, and his whole life has been a lie; he feels like he’s a lie! It would be very easy for him to just go off the rails and feel he has nothing to live for, and try to hang on to whatever threads he has left of the life he thought he had, and part of that may be trying to kill his romantic rival; and Dustin might play the hero although he probably won’t jump in front of the bullet – he might struggle with Valentin over the gun though, with the gun going off into the air or something!