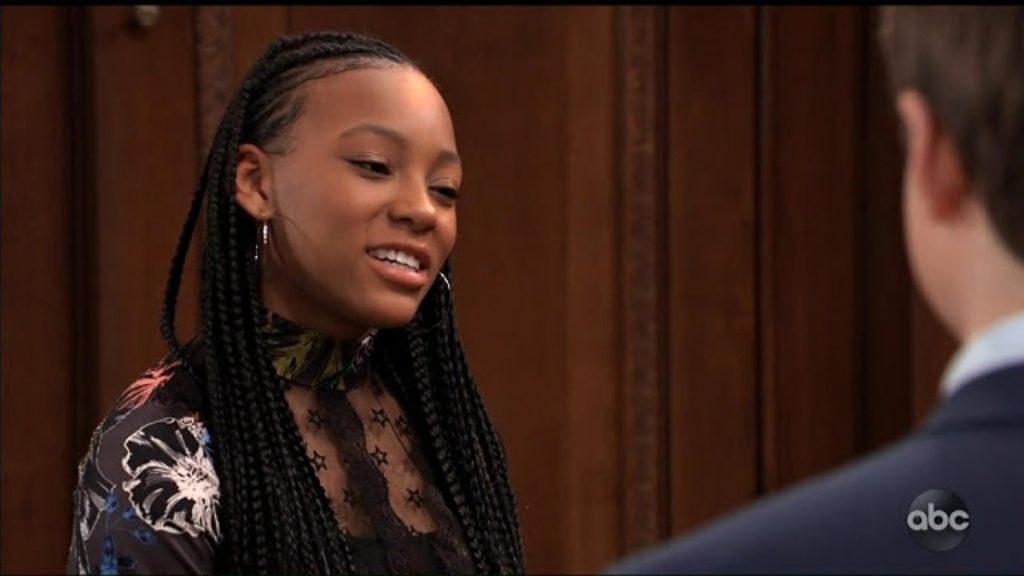 General Hospital spoilers tease that Trina Robinson (Sydney Mikayla) will soon get a visit from a previously unknown relative in an upcoming episode of GH!

General Hospital viewers will recall that Trina had gotten communication from an unknown relative through a genealogy site, like Stella Henry (Vernee Watson) had earlier last year. Trina, like Stella at first, didn’t care, and didn’t want to know. However the relative wants to meet Trina, and is pushy enough to force the issue and tracks her down! She may get this visit in a public place since she is a teenager, possibly at Ava Jerome Cassadine’s (Maura West) art gallery where she is an intern when she’s not at school. Could this relative be an uncle – and might it be Marcus Taggert (Real Andrews)?

General Hospital fans have speculated that Trina could be the daughter of Nikolas Cassadine (Marcus Coloma) and Gia Campbell, (Marisa Ramirez), Taggert’s younger sister who once was engaged to Nikolas. She left town in 2003 to pursue a law degree, and a pregnancy may have been inconvenient at the time so she very well could have put a baby up for adoption and not even told Nikolas! She was also a model during her time in Port Charles, one of the “Faces Of Deception”. Taggert didn’t approve. Before she left town, however, she had broken up with Nikolas and started dating Zander Smith (Chad Brannon). They slept together but then broke up and he went back to Emily Quartermaine (Natalia Livingston) who eventually got together with Nikolas! This was shortly before she left town, but she had been involved with Nikolas and Zander within the span of only a couple of months – before she would “show” if she had been impregnated.

Gia Campbell May Not Have Wanted To Find Out What Happened To Her Baby Girl, But Her Brother Might!

Gia may not have wanted to find out whatever happened to her baby girl, but it doesn’t mean that her brother might not if he found out she had left Port Charles pregnant! It’s doubtful with the overbearing relationship that Gia and Marcus had that she would have even told him! It’s hard for a teenage girl to have a cop for a much older brother, they tend to track your every movement and assume everyone you want to date is an axe murderer or a pervert! Marcus may be saying he’s in town to visit old friends, but other than helping Police Commissioner Jordan Ashford (Briana Nicole Henry) with the Bob Massicotte (Randy J. Goodwin) case, he may be looking for a long-lost niece as well! Trina probably has no idea that she could either be working for her birth father’s wife, or be close friends with her half-brother Cameron Webber (William Lipton) depending on who Gia’s baby daddy is!