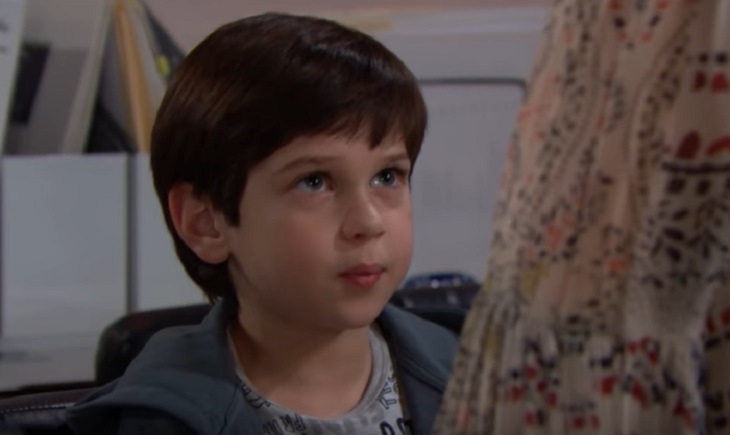 The Bold and the Beautiful spoilers for Wednesday, February 19. tease that Thomas Forrester (Matthew Atkinson) will get another bright idea. As B&B viewers know, he’s been doing a lot of manipulation lately, and his end game is to make Hope Logan (Annika Noelle) his. He hasn’t hesitated to use his own son Douglas Forrester (Henry Joseph Samiri) in his plan, and he’s recently done so in a big way.

The Bold and the Beautiful Spoilers: Hope Logan Tries To Comfort An Upset Douglas Forrester

In fact, Hope is currently trying to comfort Douglas, who is very upset as a result of Thomas’ manipulations. As B&B viewers know, Douglas was seriously upset when he saw Thomas kissing and holding hands with Zoe Buckingham (Kiara Barnes) recently – and that was all part of Thomas’ design. He wanted Douglas to get upset and then go running to Hope saying that he didn’t want Thomas to be with Zoe.

And that’s exactly what Douglas did. He told Hope that he wanted his Mommy and Daddy to be together, and that seeing Thomas kiss Zoe scared him. He even said that he was afraid that Zoe would replace Hope as his Mommy. The whole thing is very upsetting to Hope, and she seems to be having exactly the reaction that Thomas wants her to have.

The Bold and the Beautiful Spoilers: Thomas Forrester Decides To Escalate His Plan To Get Hope Logan For Himself

Well, on Wednesday’s episode of B&B, Hope will continue to try to comfort Douglas as he pours it on thick, having been coached by his father. As B&B viewers know, Thomas is hiding in the wings, overhearing the whole exchange, and he’s as happy as can be about it. But Thomas isn’t going to stop there; instead, he’s going to escalate his plan and put together a situation that is sure to put Douglas over the edge.

According to B&B spoilers, Thomas will decide to put together a Forrester family dinner, presumably out of the kindness of his heart. He’ll want Douglas to be there, and of course he’ll invite Hope as Douglas’ mother. Zoe will be present as well, as Thomas’ date…and Thomas will have something very important up his sleeve when it comes to Zoe.

Thomas Forrester Will Propose To Zoe Buckingham At The Forrester Dinner

The Bold and the Beautiful spoilers say that Thomas will decide to propose marriage to Zoe at the dinner in a very public way. And of course, he’ll do so in front of Douglas, so that he gets a major reaction out of the little boy. He’s probably hoping that Douglas will really act out and react against the marriage happening, which will be exactly what he’ll want.

Of course, what Thomas will want is for Douglas to get upset about what Thomas is doing with Zoe and run to Hope and beg her to be with his Daddy. And he’s counting on Hope to fall for the whole thing and not see, as Liam Spencer (Scott Clifton) sees, that Thomas is manipulating her and trying to get her to “see” that she needs to be with him.

It seems that Thomas will be banking on Hope to have a big reaction to the proposal as well, and maybe even feel a little jealousy. But most of all, he’ll want to trigger her maternal instincts and get her to see on her own that the only real solution for making Douglas happy is if she’s with him.

B&B viewers would look for Thomas to start cooking up his plan for the big Forrester dinner and his proposal to Zoe on Wednesday’s episode. He might share his plan with Vinny Walker (Joe LoCicero) or Quinn Forrester (Rena Sofer), since both are onto how he really feels about Hope. Or he might just go it alone and let the proposal come as a shock to everyone.