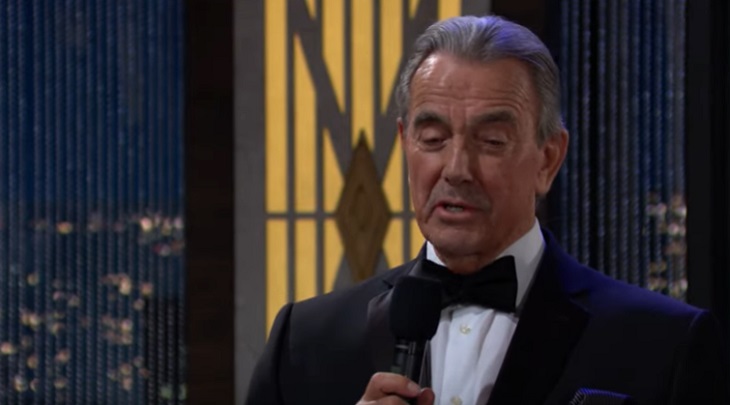 The Young and the Restless (Y&R) spoilers for Wednesday, February 19, tease that Eric Braeden will celebrate 40 years as Victor Newman while Newman Enterprises celebrates its 50th anniversary. At the gala, Victor thinks back on memories of his mother, Cora Miller (Dorothy McGuire). Nick Newman (Joshua Morrow) says a few words to welcome everyone and introduce Victor as the company’s founder.

Victor speaks about getting his start and selling out of his trunk. His business grew into a big success and thrived in Genoa City. Victor reflects on a previous celebration of him running Newman for 25 years. Brad Carlton (Don Diamont), Neil Winters (Kristoff St. John), Jill Abbott (Jess Walton) and Jack Abbott (Peter Bergman) were all on hand.

Afterward, Nikki Newman (Melody Thomas Scott) thinks back on when she first got together with Victor. It’s tough for Nikki to imagine where she’d be without him. Their journey has been a pretty wild ride and was heartbreaking at times, but Nikki wouldn’t have it any other way. Victor agrees that the road’s been rocky, but he loves Nikki more than he ever has. Once Victor kisses Nikki, the guests burst into applause.

The Young and the Restless Spoilers – Victoria’s Emotional Speech

Victoria Newman (Amelia Heinle) speaks about Victor being her mentor and the only man she can count on in those moments when she falls. She flashes to a tender pre-wedding scene before it’s Nick’s turn to talk. He recalls getting his first office thanks to Victor, and Abby Newman (Melissa Ordway) remembers guidance about being a strong Newman.

Adam Newman (Mark Grossman) decides he’d like to speak, but he asks permission first. Victor has a warm and fuzzy flashback of Adam as a baby before his son talks. Adam thinks they always find their way back to other. There’s an invisible bond between this father and son, so Adam hopes this is a real turning point in their relationship.

Adam mentions how he wants to know Victor better, which Victor approves of. They share a sweet hug while the other Newman siblings trade looks. Jack’s up next to reflect on his rivalry with Victor and how there’ll never be anyone else like him. Ashley Abbott (Eileen Davidson) also says a few words about her complicated history and has a flashback of a romantic period between them.

Paul Williams (Doug Davidson) and Jill go next before Michael Baldwin (Christian LeBlanc) pipes up with a funny comment. Things turn a bit somber as Victor remembers his mother leaving him in the orphanage. He also recalls lashing out at his father, Albert Miller (George Kennedy), over abandonment. Matt Miller (Robert Parucha) makes a speech regarding the difficulties and is glad he reconnected with Victor in adulthood. They acknowledge that they’ve moved beyond the past and hug each other.

Victor thanks those who have shared memories and shown up to honor him. He steps over to Devon Hamilton (Bryton James) and Elena Dawson (Brytni Sarpy), so they all reflect on Neil. Then, it’s time for Nikki’s impressive surprise. She announces a special installation created for this event – and Noah Newman (Robert Adamson) helped her out with it. He’s become a successful photographer in London.

The Young and the Restless Spoilers – A Victor Newman Tribute

The installation features a gallery of huge Victor photos – complete with colored lights to showcase Victor’s vibrance and offer a dramatic effect. Victor speaks with his first wife, Julia Newman (Meg Bennett), before she heads out. Nikki joins Victor as they see Matt on his way, too.

Chelsea expresses how proud she is of Adam, who meant what he said. He believes this is a turning point with Victor. Chelsea hopes that’s true and looks at the photos along with Adam. Back with Victor, he’s blown away by everything Nikki put together. Victor makes it clear that Nikki’s what’s most important to him and leans in for a kiss.

The Young and the Restless spoilers say Victor fans will definitely want to tune in for this memory-filled tribute! We’ll give you updates as other Y&R news comes in. Stay tuned to see what else is brewing in Genoa City.