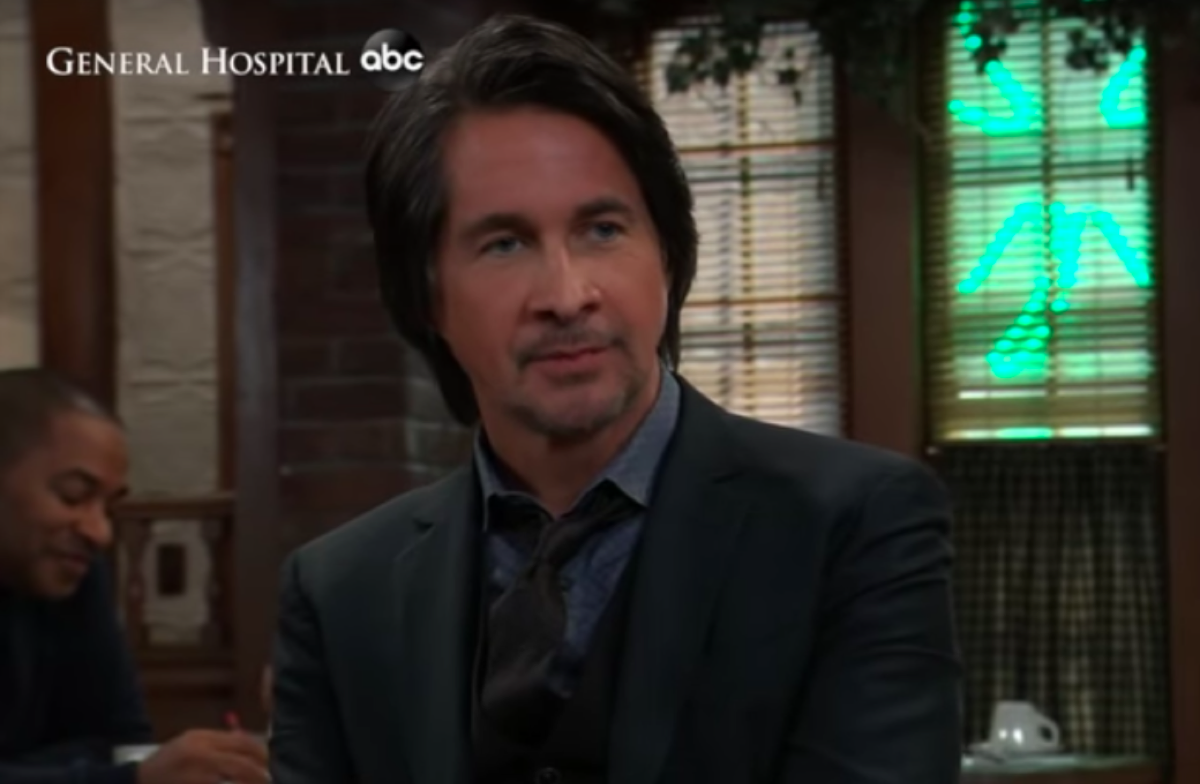 Welcome to your Wednesday February 5th General Hospital (GH) recap! We begin our day at Anna Devane’s (Finola Hughes) mansion where her son Peter August (Wes Ramsey) and Violet are playing superhero. Hamilton Finn (Michael Easton) comes home and Peter says he can’t wait til him and Anna get married, then they will officially be a family.

At the metro Court restaurant, Maxie Jones (Kirsten Storms) is telling Nina Reeves (Cynthia Watros) the plan to unite Crimson and Deception. They run into Jasper Jax (Ingo Rademacher) and Nina can’t get her words straight as she fawns over him.

Alexis Davis (Nancy Lee Grahn) arrives at the Metro Court and sits down with Jax for lunch. They discuss the safety issues that come with being related to Sonny Corinthos (Maurice Bernard).

Sasha and Michael face off with an angry Nelle

Michael Corinthos (Chad Duell) tells Nelle Benson (Chloe Lanier) that she has to move into the boat house. Nelle is pissed and reminds them that Sasha Gilmore (Sofia Mattsson) is the one who committed fraud.

Martin Gray (Micheal E Knight) shows up and asks for Nelle to turn her shares over for a large sum of money. Nelle looks at it and tears up the paper in his face, she insists shes not going anywhere.

Brad Cooper (Parry Shen) answers his door and its his father in law Julian Jerome (William DeVry) with coffee. Julian says he has come in peace and wants to help him. Julian says hes been selfish and he will help take care of Wiley for him.

Brad goes to check on Wiley as Julian puts some kind of pills into his coffee. Julian imagines him and Alexis taking care of Wiley while Brads arrested for opioid abuse.

Sam asks Spinnelli for his help

At Kelly’s diner, Sam McCall (Kelly Monaco) meets with Damian Spinnelli (Bradford Anderson) as they catch up about the shooting. Spinnelli asks if the two of them are going to go after Peter August, hes not worthy of Maxie’s love.

Jason updates Sonny on the shooting

At the Corinthos mansion, Jason Morgan (Steve Burton) tells Sonny Corinthos (Maurice Bernard) that he found the gunman trying to escape. Before he killed him, he gave him the name of their new enemy – Cyrus.

Carly Corinthos (Laura Wright) interrupts and wants to know who is the man who tried to kill them all. Jason says the mans name is Cyrus Renault and hes a drug dealer king pin from Canada.

Finn is not happy about Peter being in their lives

Anna Devane (Finola Hughes) thanks her son Peter August (Wes Ramsey) for coming over to play with Violet. Anna asks Finn if hes okay and hes upset that she left Peter alone with Violet.

Finn says he does not think Peter should be around his child as Anna defends her son. Finn gets angry and asks what the connection is between Peter and the assassin. Finn says she has so much unresolved guilt about giving him up as a baby that she will listen to anything Peter says.

Alexis and Jax commiserate about their situations

Alexis Davis (Nancy Lee Grahn) is wondering if Jax will apologize for keeping the secret that Nikolas is alive. He explains that he had to keep the secret in order to keep Spencer safe. Nina goes over to see Jax and relays to him how grateful she is to him.

At lunch, Maxie wonders aloud to Nina why she was acting so strange around Jax. Nina tells her that the two of them kissed. Peter arrives and sits down with Maxie to say how much fun he had with Violet.

Martin Grey wonders if Nelle is in love with Michael and she laughs him off. Nelle says she is setting a trap for all of them.

Finn leaves to take Violet to school as Anna is crying after their fight regarding Peter. Julian feeds Wiley his breakfast as Brad gets sleepy on the couch. Brads phone rings and it’s the hospital saying Lucas has woken up.

Carly wonders if she should take all the kids and move across the country. Sonny goes to the prison to meet with Cyrus….flash to preview