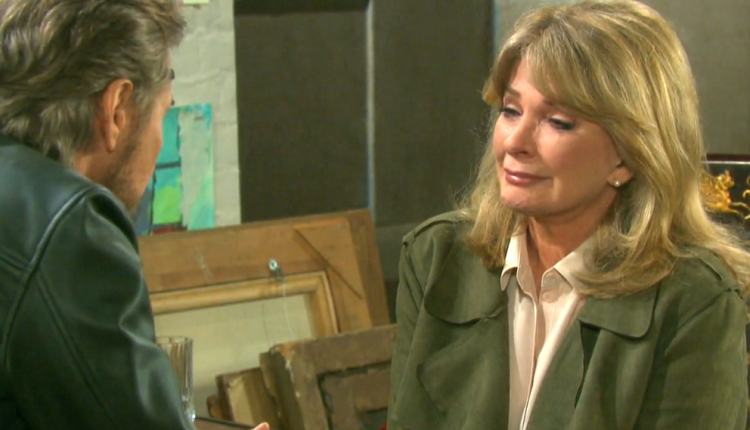 Some perceptive Days of Our Lives viewers who use the closed captioning feature noticed that in the scenes with “Steve” untying Marlena and telling her that John Black (Drake Hogestyn) had been killed by Stefano, that the closed-captioning read “Hattie As Marlena”. Whether that was intentional on the part of Days of Our Lives powers that be or not is unknown.

Of course, if there was a switch they wouldn’t have shown it on the program, but earlier in the same episode, at Brady’s Pub, a guilt-ridden Kate Roberts (Lauren Koslow) had confessed to Hattie that she knew “Steve” was really Stefano, and that “Hope Brady” was really Princess Gina Von Amberg (Kristian Alfonso) and that she’s dangerous!

Kate worried that John and Marlena’s life together will be destroyed. However, there is a hint that Hattie could have rushed over to Marlena’s townhouse and the two could have switched; “Hope” went out to bring her car around while Marlena told her she needed some time to pack her bags, during which she listened to Detective Rafe Hernandez’ (Galen Gering) voicemail warning her about “Hope” really being Gina.

Marlena had told her to pull into the garage so she wouldn’t be seen if Stefano was parked outside, so Hattie could have come to the townhouse through the garage elevator while Gina was getting the car since the townhouse is a penthouse suite.

Bear in mind that Hattie was a protector of Hope in the women’s prison and knew Stefano and would feel quite confident that she could handle him. She may even be packing heat (a gun) in case she needed to shoot him! Hattie was on the women’s’ side of the prison what Clyde Weston (James Read) is on the men’s side.

She may seem like a silly redneck woman but she is a lot smarter than she acts and her personality belies her intelligence! Longtime Days of Our Lives viewers will recall how Hattie Adams came to be Marlena’s doppelganger; Stefano DiMera noticed how similar Hattie looked to Marlena, and sent his cohorts Wilhelm Rolf (William Utay) and Bart Beiderbecke (Steve Blackwood) to talk to her.

Bart played to Hattie’s ego and told her she could host the television show Marlena was hosting at the time better than Marlena and convinced Hattie to get plastic surgery. He recommended a Dr. Steiner, who was really Rolf in disguise. Over the years, Hattie came to hate Stefano for all the problems she encountered after letting herself be transformed into Marlena’s doppelganger and has become someone who wants to help rather than to harm.

The Bold and the Beautiful Spoilers: Quinn Pushes Her Agenda – Wants Flo To Walk Down The Aisle And Marry Wyatt