In his office, Sonny Corinthos (Maurice Bernard) is worried that Mayor Laura Spencer (Genie Francis) is going to get too involved in the battle with Cyrus. Jason Morgan (Steve Burton) suggests that maybe they arrange an “accident” in Pentonville prison. 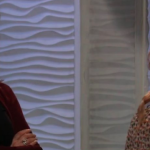 At the Corinthos mansion, Carly Corinthos (Laura Wright) knocks over Dev’s backpack and a bullet falls on the floor, she begins yelling his name.

In the car headed to the winter formal, Trina Robinson (Sydney Mikayla) and Cameron Webber (William Lipton) take selfies. Josslyn texts her to say that she and Dev are on their way. The driver looks suspiciously in the rearview mirror and says he’s taking a detour because of an accident.

Trina begins to wonder where the driver is going and he says he thought they would want some alone time. Cameron and Trina realize they are in grave danger

On the couch at their house, Franco Baldwin (Roger Howarth) gives Elizabeth Webber Rebecca Herbst) an anniversary present. It’s a box and inside there is a clue for a scavenger hunt. Elizabeth searches for the clues and finds the next three. The fourth clue leads her under the couch where she finds art supplies.

Taggert arrives at the house but has missed the kids, Elizabeth shows him the photos. He gets a phone call and it’s a message from the driver saying he has taken Trina and Cameron.

At the Metro Court, Alexis Davis (Nancy Lee Grahn) runs into her dressed up daughter Molly Lansing (Haley Pullos). Molly says that TJ has a special evening planned for them. At General Hospital (GH) TJ Ashford (Taj Bellows) looks at the engagement ring as Dr Byrne (Joe Flanigan) comes over to say hello.

TJ tells Neil that he is going to propose to Molly tonight. He arrives at the Metro Court and she goes on and on and about how weddings aren’t for everyone.

Marcus Taggert (Real Andrews) tells Jordan Ashford (Brianne Nicole Henry) that an enemy of his enemy is an enemy of mine, she’s still not happy. Jordan tells Curtis Ashford (Donnell Turner) that she is angry, but Curtis agrees that they probably need Sonny’s help.

Curtis say that desperate times call for desperate measures, especially with the danger she is facing.

After finding the bullet is Dev Cerci’s (Ashton Arbab) bag, she yells for him and Josslyn, but they don’t answer. She hears the door and it’s them with Brando – she starts screaming that they were not supposed to leave the house.

Carly says to Dev she needs to talk to him and screeches about finding the bullet. Dev says that the bullet was planted and it’s a message from the man who is after all of them.

Jordan meets with Sonny and tells him that Taggert was attacked after meeting with them earlier. The driver pulls a gun out and ties up Trina and Cameron.

Elizabeth gets a message that Cameron has been kidnapped and calls Jason for help. TJ gives Molly the ring and he asks her to marry him, but she says no.

Taggert gets the message from the kidnapper and shows up at the warehouse where Trina and Cameron are being held. Outside we see Curtis Ashford with a gun………..flash to preview

Stick with the ABC soap, and don’t forget to check Soap Opera Spy often for the latest General Hospital spoilers, updates, and news.