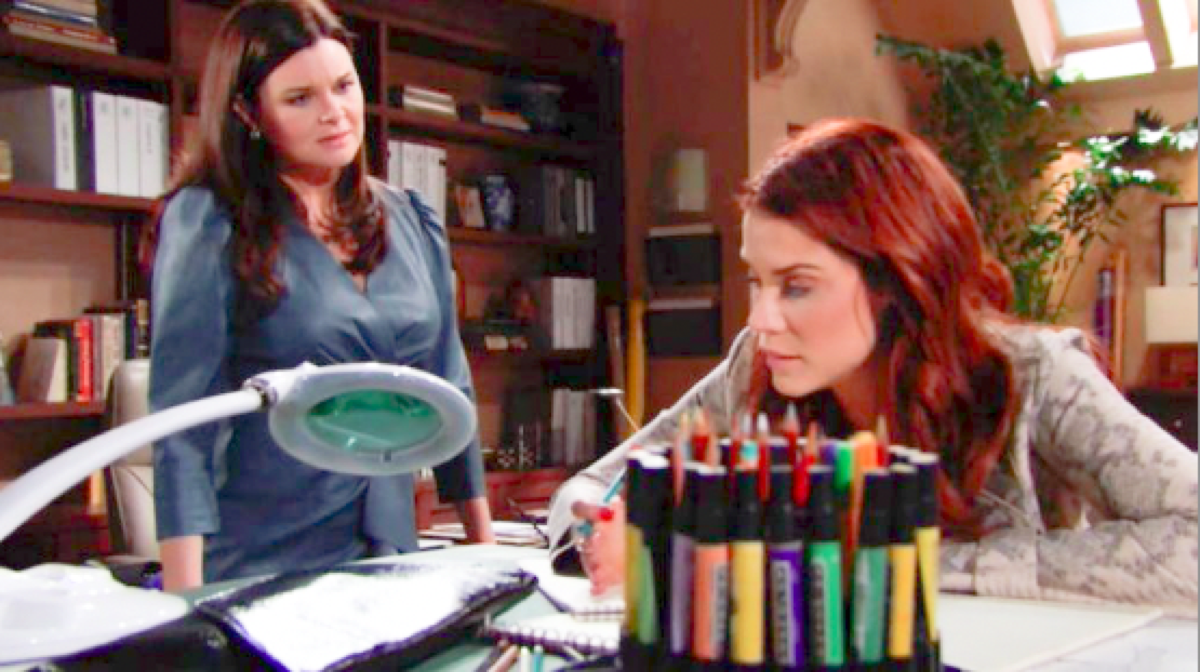 The Bold and the Beautiful spoilers for Friday, February 28, tease that Sally Spectra (Courtney Hope) will find herself feeling suspicious. As B&B viewers know, Sally just received a declaration of love and an invitation to move back in with Wyatt Spencer (Darin Brooks).

It really took her by surprise, given that not too long ago, Wyatt was telling her that he wanted to break off their engagement so he could go back to Flo Fulton (Katrina Bowden).

Well, on Friday’s B&B episode, Sally will approach Katie Logan (Heather Tom) with some questions. She’ll probably relay to Katie that Wyatt professed his love and asked her to move back in with him, then it looks like she’ll want to know whether all of this was precipitated by Katie telling Wyatt about her terminal condition. Of course, B&B viewers know that Sally is super sensitive to being pitied, and that’s the last thing that she wants.

Next, on Friday’s new episode of B&B, Katie will catch up with Flo. As B&B viewers know, Katie was very touched by Flo’s willingness to step aside and let Wyatt spend the rest of Sally’s days with her. Katie knows just how much Flo and Wyatt want to be together, and she realizes that it’s a huge sacrifice that Flo is making here.

But Katie won’t be the only one who ends up being impressed by Flo’s compassionate gestures toward Sally. The Bold and the Beautiful spoilers say that Bill Spencer (Don Diamont) will also join in the conversation with Flo and Sally and that he’ll learn all about the plan that Wyatt and Flo have for Sally. He’ll hear that Wyatt asked Sally to move in with him, and he’ll be surprised.

He’ll also be touched that Flo is willing to make the sacrifice for Sally, since the two women were in competition for Wyatt. According to B&B spoilers, Bill will pay Flo a huge compliment in front of Katie, and it will be the type of compliment that suggests he may be willing to actually forgive Flo.

The Bold and the Beautiful Spoilers Thursday, February 27: Wyatt Stuns Sally With An Admission & An Invitation – Katie’s Impressed With Flo https://t.co/58b8NSasIg pic.twitter.com/J7NQL0ql7i

Of course, B&B viewers know that Bill has had a really hard time getting beyond the fact that Flo worked directly with Reese Buckingham (Wayne Brady) to keep Beth Spencer (River Davidson and Madeline Valdez) from Liam Spencer (Scott Clifton) and Hope Logan (Annika Noelle). But now that he’s witnessed two compassionate actions on Flo’s part – her kidney donation to Katie and now her sacrifice for Sally – he might just think that he’ll be able to forgive Flo.

At any rate, it should be a positive step forward for Flo and Bill. He might not be ready to forgive her for the Beth fiasco, but it looks like he’ll be closer to that end, which is something that should make Katie very happy, as she wants nothing more than for her family to be united.

The Young and the Restless’ Spoilers: Phyllis Remains Greedy and Manipulative –Should Abby Follow Chelsea’s Lead?