General Hospital spoilers for Thursday, February 27 tease another exciting day of drama, suspense and confrontations for GH fans, plus two teens in danger!

Alexis Davis (Nancy Lee Grahn) meets her youngest daughter, Molly Lansing Davis (Haley Pullos) at the Metro Court. Both are smiling as the mother asks the daughter how her vacation was, and then on to more serious business! Alexis will want to know how her baby girl’s life and relationship are going and may ask some pertinent questions – after all, enquiring mother’s minds want to know! 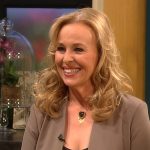 Dr. Neil Byrne (Joe Flanigan) gives TJ Ashford (Tajh Bellow) sage advice over at General Hospital. Neil tells TJ if it feels right, then go for it! TJ probably chickened out about the marriage proposal to Molly, considering all of her negativity about the institution of marriage in general and the commercial trappings, which she had ranted about to TJ when he was getting ready to pop the question! Perhaps Neil is encouraging TJ to try again!

As a nervous Josslyn Jacks (Eden McCoy) and possibly Brando Corbin (Johnny Wactor) look on, Carly Corinthos (Laura Wright) gives Dev Cerci (Ashton Arbab) the third degree about the bullet she found was in his backpack when it spilled out on the floor, and wants to know why it was there? Dev never did want to talk about his parents or family in Turkey or how he came to be an orphan – perhaps they were shot in front of him and the bullet was something to remind him of them. No matter what it takes you know Carly is going to get the answers!

Elsewhere, Curtis Ashford (Donnell Turner) talks to his wife, Police Commissioner Jordan Ashford (Briana Nicole Henry) about the suggestion that retired Lieutenant Marcus Taggert (Real Andrews) just gave them – about calling on Sonny Corinthos (Maurice Benard) for his help in taking down Cyrus Renault (Jeff Kober). Jordan was a little dubious about the idea, but Curtis thinks if Sonny’s down to help, they should take him up on it!

Taggert looks like he’s out in an alley and is walking and talking on his cell phone and calls Curtis for help. He doesn’t look like he’s in danger at the moment although as General Hospital viewers will recall, he came to GH to get treatment after narrowly escaping being shot up with something by two of Renault’s goons! They even found a syringe with something in it which Taggert had obviously managed to get away from them! He missed meeting his daughter Trina Robinson (Sydney Mikayla) at the Baldwin house as she and Cameron Webber (William Lipton) were getting ready to go to the Midwinter Formal, and called an Uber to take them instead when he didn’t show up. He might want Curtis to check in on them – and that might not be a bad idea!

Jason Morgan (Steve Burton) talks to Sonny about arranging an accident – that would probably be inside Pentonville Prison, and the accident would probably be deadly and happen to Renault! Maybe he could ask Ryan Chamberlain (Jon Lindstrom) for a favor? Ryan’s really good at causing accidents – and not being caught at it! Perhaps he was a DVX assassin all those years he was presumed dead!

Meanwhile, it’s bad news for Trina and Cameron, because the Uber driver is one of Cyrus Renault’s goons, and the two teens look at each other with concern as he tells them there has been a change of plans! It sounds like he’s not dropping them off where he is supposed to! Somebody needs to find that Uber NOW and save those kids! It’s obvious that Taggert’s family is the target now that Taggert himself escaped!