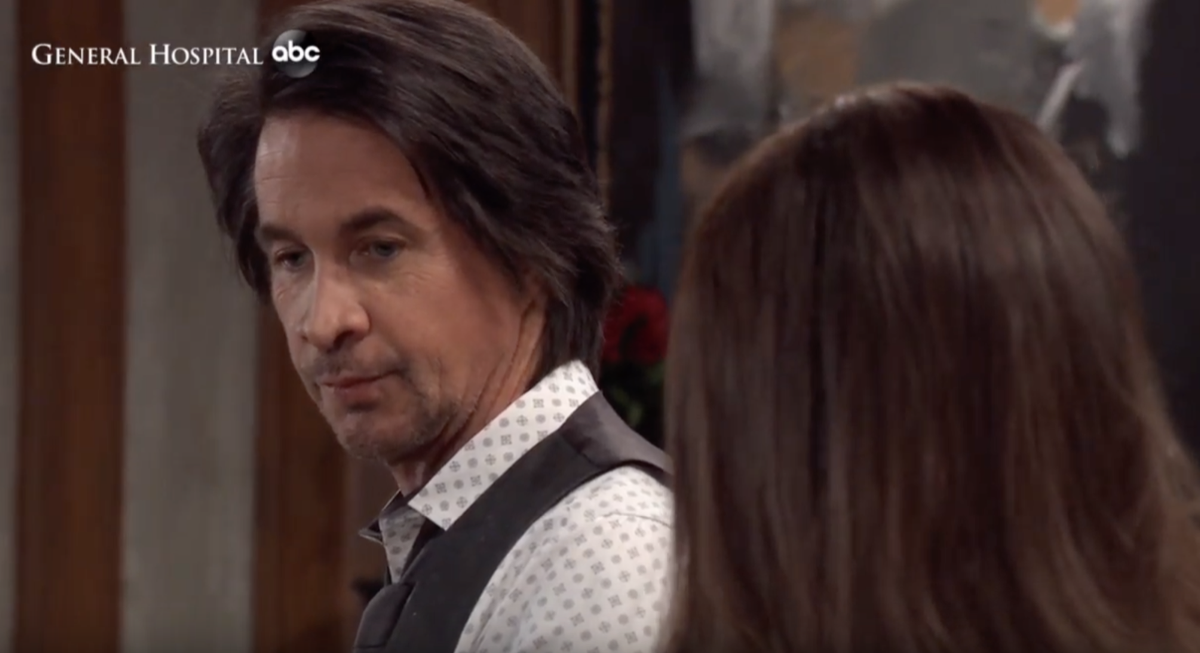 Welcome to your Thursday, February 13th General Hospital (GH) recap! We begin our day at General Hospital (GH) where Jason Morgan (Steve Burton) is comforting a distraught Sam McCall (Kelly Monaco) who is upset they probably cannot be together for another two years. As Sam exits the hospital room she runs right into her parole officer who wonders why she is there.

Anna Devane (Finola Hughes) is furious with Hamilton Finn (Michael Easton) as she figures out what he did. He’s the one who told Sam and Jason the new info about her son Peter August (Wes Ramsey).

At the Metro Court Bar, Lulu Spencer (Emme Rylan) runs into a well-dressed Dustin Phillips (mark Lawson) and wonders what he’s doing there. Dustin says he has a date with someone else.

At the Jerome Gallery, Nina Reeves (Cynthia Watros) begs Ava Jerome (Maura West) not to reveal that she kissed Jax. We see a shocked Valentin Cassadine (James Patrick Stuart) listening around the corner. Valentin appears and says to Nina that he needs to talk to her now.

Valentin tells Nina and an ecstatic Ava that he is not a true Cassadine. Nina says he is free of the Cassadines, his life is his own. Valentin leaves as Ava tells Nina that shes afraid of the look he had on his face.

Willow tells Chase that she has been asked by Lucas to babysit Wiley. He doesn’t think it’s a good idea for her.

GH Spoilers – Brad Cooper is in the thick of things

At the Metro Court Maxie Jones (Kirsten Storms) reminds Brad Cooper about Ellie Trout losing her lab job at General Hospital (GH). Maxie tells Brad that she’s moving back and has a great new job. Brad joins Nelle Benson (Chloe Lanier) at a table and tells her that he and Lucas and Wiley are moving away.

Nelle is furious and says there’s no way he’s taking Wiley away. Brad tells Nelle that he told Lucas the truth before the car accident.

General Hospital Dustin Phillips has a meeting with Jasper Jax

Dustin Phillips (Mark Lawson) tells Lulu that he’s dressed up because he has a meeting with jasper Jax (Ingo Rademacher). Lulu tells him he is a hero and she will wait for him and they will do dinner. Dustin meets up with Jax who hands him a check for saving Josslyn’s life.

GH Anna Devane and Hamilton have a huge fight

Finn calls Peter a murderer while Anna continues to defend her son from the attacks. Anna says Jason is going to go after her son and kill him. Finn lists all of the things that Peter is most likely responsible for as Anna thinks he’s going to change his ways.

Sam faces off against her parole officer.

Sam’s parole officer says she did a surprise visit to the home and she was not there. Jason stands by the door listening as the officer goes right towards it – suddenly Epiphany appears and interjects. Epiphany tells the parole officer to not interfere in the health of a patient.

Valentin goes to his safe at the hotel and grabs his gun. He shows up at the Crimson office and dreams of shooting Jax, but does not do it.

Finn comes downstairs with Violet and their bags saying he needs to protect his daughter, so they need to leave.

Peter and Maxie are troubled when they realize Anna and Finn may have broken up.

Nelle freaks out when she realizes that Lucas knows about the secret, but cannot remember at this time. Brad leaves and Nelle calls Valentin to let him know shes going to sell him her ELQ shares. Valentin holds the Cassadine ring and looks up at someone we cannot see who he calls Helena………flash to preview