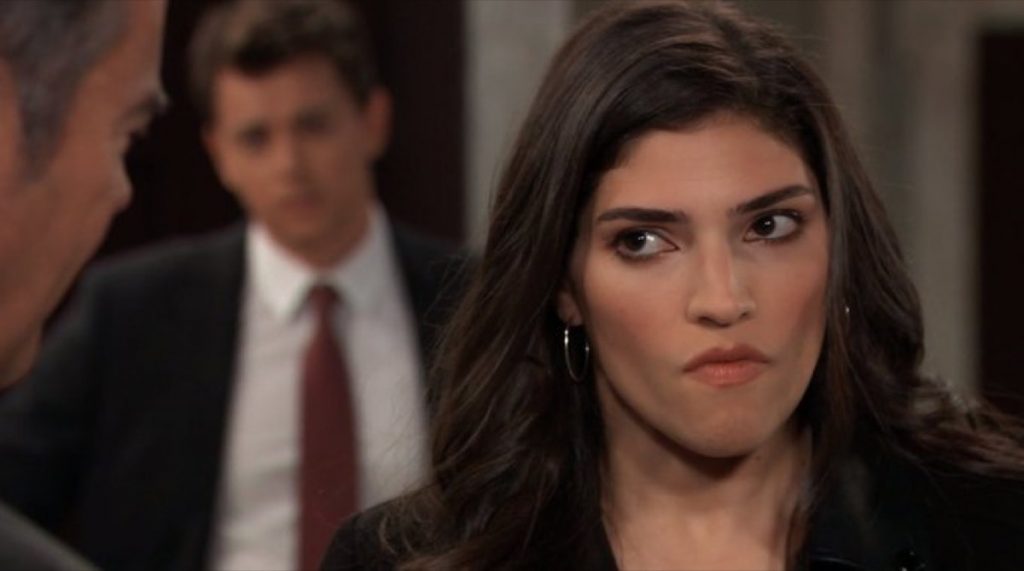 Welcome to your Monday, January 13th General Hospital (GH) recap! We begin our day at the Quartermaine mansion where Brook Lynn (Amanda Sutton) is on her phone as her grandmother Tracy Quartermaine (Jane Elliott) enters the room. She tells her that she’s shocked Nikolas Cassadine is alive and he called to ask how she is doing.

Ned Ashton (Wally Kurth) and Michael Quartermaine (Chad Duell) enter the living room and mention the shareholders meeting where they will figure out what to do with Oscar’s shares of ELQ. Brook Lynn says everyone stays put because she has a big announcement to make.

At her mother’s house, Sam McCall (Kelly Monaco) is on the phone with Jason Quartermaine (Steve Burton) who says he’s meeting Michael before the Shiloh memorial. Sam notes that it seems strange that Willow wants to go, Jason says it’s for closure.

At the Metro Court Restaurant, Franco Baldwin (Roger Howarth) kisses his wife Elizabeth Webber (Rebecca Herbst) passionately. They are excited to have a date night even though she’s shocked that Nikolas is alive.

Jason Morgan (Steve Burton) walks up to the table and Franco thanks him for his help. He spots Peter August and thanks him as well for saving him from the assassin.

At Crimson, Maxie Jones (Kirsten Storms) goes on and on about the stress of running a magazine while Nina was gone. Peter August (Wes Ramsey) stares off into space and is obviously not listening, he says its been a tough day.

Peter flashes back to the findings his mother Anna found out – his connection to the assassin. Maxie hears the elevator opens and it’s her daughter Georgie and her ex Spinelli (Bradford Anderon). She’s super excited to see them and Spinelli says they may be back permanently.

At Anna Devane’s (Finola Hughes) mansion, Robert Scorpio (Tristan Rogers) arrives and says he wants to tie up a few loose ends. Anna wonders what this is about and he says it’s about the assassin David Black. Anna says his bias against her son Peter is showing and it’s unfair. Robert says there seems to be an obvious connection between Peter and the corporation David Black worked at.

GH Spoilers – Brook Lynn has a surprise for the Quartermaine’s

Brook Lynn (Amanda Sutton) tells a stunned Tracy and Ned that she officially has changed her last name to Quartermaine. Ned says he is thrilled and Tracy wonders what her “angle” is by doing this. Michael says he heard she has a gig tonight at the Floating Rib, which surprises all of them.

At the Floating Rib, Dustin Phillips (Mark Lawson) is telling Lulu Spencer (Emme Rylan) he can’t believe what she’s been through this week. Between the wedding and her dead brother coming back. She’s happy Nikolas is back, but furious he kept it a secret.

Alexis Davis (Nancy Lee Grahn) overhears her daughters plan to meet with Jason “accidentally” and is not happy. Alexis says she needs to be more careful and should not be communicating with him at all. The doorbell rings and its Neil Byrne (Joe Flanigan) which pleasantly surprises Alexis.

Spinelli tells Maxie that Ellie may be in the running for a job that’s located near Port Charles. As Brook Lynn gets for her music gig a man appears – it’s the music agent shes been trying to get rid of. They struggle and she punches him as Dustin interferes and realizes he knows Brook Lynn. Neil tells Alexis he’s losing his medical license because of her. Robert tells Anna that there are “things in the works” when it comes to Peter, she needs to be prepared……..flash to preview