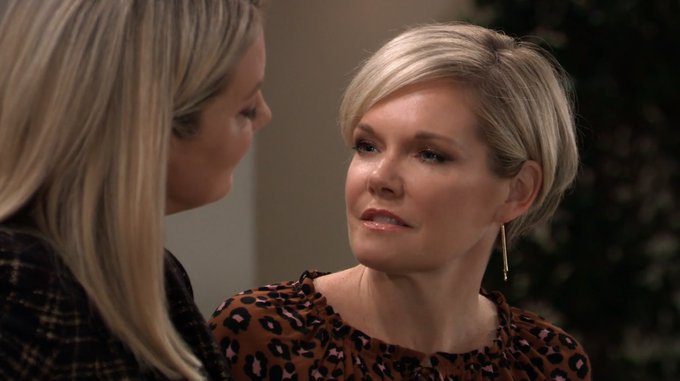 At the Metro court bar, Nina Reeves (Cynthia Watros) is having a martini when Valentin Cassadine (James Patrick Stuart) approaches. Valentin says he regrets causing her pain, but he will not regret trying to make her happy.

At General Hospital (GH) Lulu Spencer (Emme Rylan) tells her mother Laura Spencer (Genie Francis) how grateful she is for Dustin saving her life. Laura wonders why then is it making her so tense?

At Kelly’s Diner, Brook Lynn (Amanda Setton) spies Dustin Phillips (Mark Larson) and asks him to join her. Brook Lynn calls him a superhero that hides his true self as a teacher. Dustin looks at her latest song writing and hopes all the best for her.

GH Spoilers: Lucas Jones wakes up from his coma

At Turning Woods, Lucas Jones (Ryan Carnes) wakes from his coma and flashes to the car accident. He wonders what his husband Brad Cooper (Parry Shen) was about to confess? Lucas tries to put the pieces together and lies that he doesn’t remember. His dad Julian Jerome (William DeVry) says being alive is all that matters at this time.

Willow Tait (Katelynn Mcmullen) arrives to check on Lucas and says how wonderful Michael has been with Wiley.

At the metro court bar, Nina Reeves (Cynthia Watros) reiterates to Valentin again that they need to move on from each other. His lawyer Martin Grey (Michael E Knight) arrives as Nina leaves. Martin tells Valentin that there next target will soon be in position.

Ava is at odds with her new hubby Nikolas

At General Hospital (GH), Ava Jerome (Maura West) acts like a concerned wife and gives Nikolas a list of best rehab facilities for his mother Laura. He says thank you to her, but then whispers in her ear to go far far away.

Nina shows up at the Jerome Gallery while Ava is working and says they are comrades in arms.