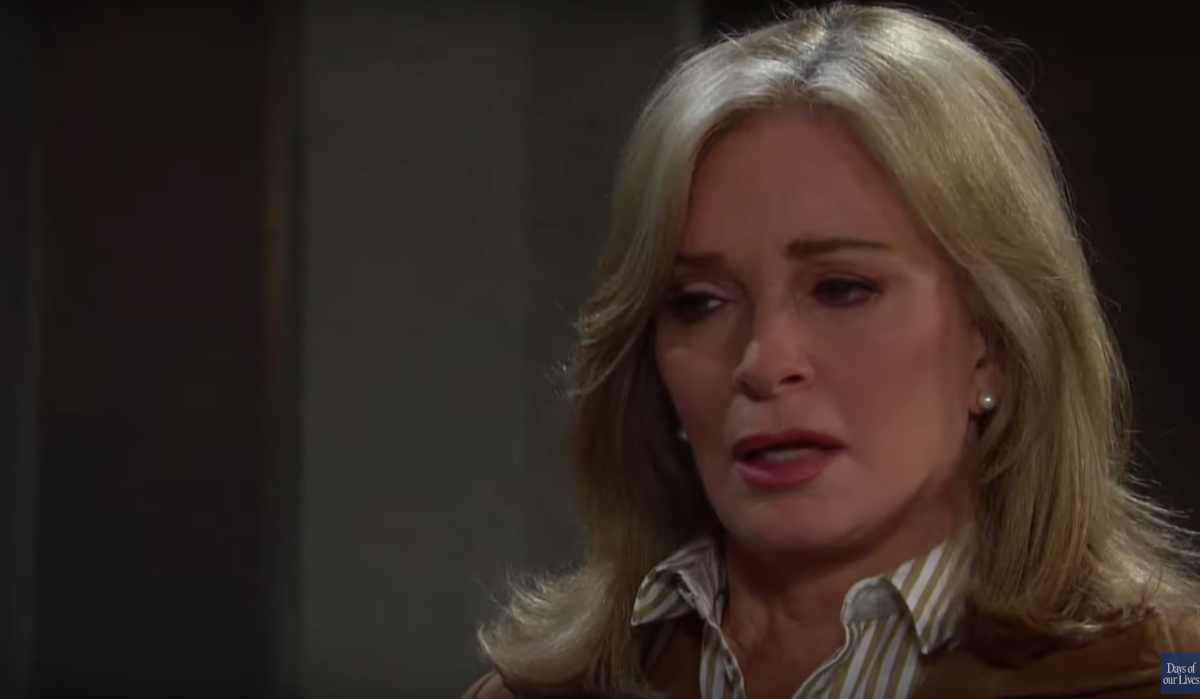 In Prague, the real Marlena Evans (Deidre Hall) bursts into the warehouse where Princess Gina Von Amberg (Kristian Alfonso), who has been masquerading as Hope Brady for over a year, has drugged and kept John Black (Drake Hogestyn) hostage after he was deceived into thinking that Dr. Wilhelm Rolf (William Utay) had killed his partner, Steve Johnson (Stephen Nichols) and that Marlena was dead as well, after Gina first told him Stefano DiMera (Stephen Nichols) killed her, and then that she did. Marlena will make a sacrifice to save John’s life, possibly trying to make a deal with Gina.

Days of Our Lives Spoilers: Stefano DiMera And Chad DiMera Come To Blows

Back in Salem, Kristen DiMera (Stacy Haiduk) was not able to convince Chad DiMera (Billy Flynn) that “Steve Johnson” wasn’t really Stefano DiMera in some kind of disguise after he and Abigail DiMera (Kate Mansi) brought the “Steveano” portrait to her in Friday’s episode. The other theory is that perhaps Steve has either been brainwashed into thinking he is Stefano, and that is who has been communicating with Chad, or perhaps either Steve or Stefano has developed dissociative identity disorder, as implied by Abby, with either Steve manifesting a Stefano alter, or, possibly, it could be the other way around although it’s more likely that Steve thinks he’s Stefano. Chad may not know where to look for his father, but he knows how to find Steve and the two come to blows in Monday’s episode! Will “Steveano” try to convince Chad that he is his father, and would Chad believe him if he did?

Ben Weston (Robert Scott Wilson) and Clyde Weston’s (James Read) prison escape goes awry after Will Horton (Chandler Massey) failed to convince the guard that Ben was sick when he didn’t show up for roll call, and the guard checked his bed, finding pillows in the bed instead of Ben! This guard is obviously not on Clyde’s payroll, as he reports an escape in process, and as a result, Ben is shot! Clyde urges Ben to flee while he stays behind to keep the guards’ attention. Ben runs, and unexpectedly finds Ciara Brady (Victoria Konefal) waiting for him on her motorcycle, and finds out she was in on the escape plans too!

In Prague, Kate Roberts (Lauren Koslow) surprised Detective Rafe Hernandez, (Galen Gering) who was not expecting to find her there! In Friday’s episode she confessed she knew that Hope was Gina and Steve is Stefano, and Kate feels bad she didn’t speak up sooner. She wants to make up for her mistake and joins Rafe in a search for Princess Gina and hopes they find her in time!