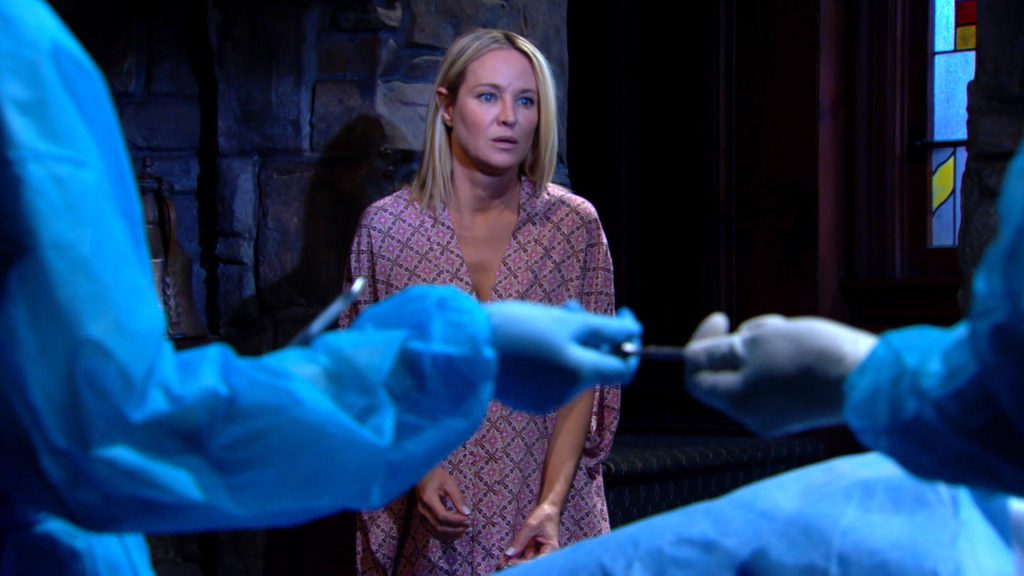 The Young and the Restless (Y&R) spoilers for Monday, February 10, tease that Theo Vanderway (Tyler Johnson) and Jack Abbott (Peter Bergman) will show up for work. The same can’t be said for Kyle Abbott (Michael Mealor) and Summer Newman (Hunter King), who’ll be absent from the office at the start of Monday’s episode.

At Jabot, Jack and Theo ponder MIA Summer and Kyle. Talk turns to Jack’s recent advice, which Theo decided to take. In his Grand Phoenix suite, Kyle awakens in bed with Summer and promises this wasn’t a mistake. Summer’s glad since she worried Kyle would wake up guilty – and that would’ve ruined things. They discuss not causing any more unnecessary pain and how they can figure it all out later.

Once Summer finally makes it in to work, she gives Theo instructions regarding an influencer. It isn’t long until Kyle appears, so Theo immediately starts needling him. He thinks Kyle looks like he didn’t sleep well. Kyle urges Theo to mind his own business and quit whatever game he’s playing.

Theo turns his attention back to Summer and wants her to acknowledge the obvious: she spent the night with Kyle. Summer eventually rants about how Theo should stay away from Lola since she’s too good for him. Theo thinks it’s ridiculous for Summer to act like she’s protecting Lola.

Over with Jack, he listens as Kyle fills him in on his marriage troubles. Kyle points out he was the problem, not Theo. Jack hints that couples have to work through things, but Kyle argues that it’s too late. He tells Jack about the divorce and admits he never got over Summer. She was always right there. No matter how hard Kyle tried, he couldn’t get Summer out of his system.

Kyle confesses that he ignored the little voice inside and now realizes how much pain he caused – for both Lola and Summer. He just wants to move forward without causing more. At the hospital, Sharon Newman (Sharon Case) complains about Rey Rosales (Jordi Vilasuso) lightening his workload. She wants everything to be as normal as possible, but Sharon remains Rey’s priority.

Sharon chats with the nurse and ultimately urges Rey to take off. She’s got Mariah Copeland (Camryn Grimes) to keep her company during this first round of chemo. Mariah shares some laughs with her mom over a quiz with “TMI” answers. She jokes about trying to find a G-rated one instead. Sharon ends up looking at her chemo pump and seeming pretty rattled.

Back with Rey, he shows up at Society to see Lola. Rey wonders what happened when Lola crumbles in his arms. After Rey’s informed of the breakup, he’s livid about how things went down. Rey always knew Kyle was trouble. Lola defends Kyle since he truly wanted this to work out, but he’s just got so much history with Summer. As for Lola, she’s relieved to have a clean break now.

Rey meets back up with Sharon at Crimson Lights, where Mariah’s also concerned about her. Sharon feels like they’re hovering and promises she’s feeling OK. However, Sharon admits she was unsettled over the chemo pump earlier. This experience has been a terrifying one so far – and Sharon knows she’s still got a long road ahead of her. She’s glad to have supportive loved ones on her side.

Theo makes his way over to see Lola before dropping a bomb. He notes that at least Kyle waited until Lola threw him out. Theo adds that Kyle didn’t wait long, but he waited! He suggests it was so Kyle could tell himself that he didn’t cheat on Lola with Summer. It dawns on Lola that they slept together, but she decides she isn’t surprised.

Lola ends up shoving Theo against the freezer and initiating a heavy make-out session. After their kisses conclude, Lola says they should get out of there. She doesn’t want to think about work or anything else. Theo turns Lola down since he knows she’d have regrets and he couldn’t handle that. Lola confirms that Theo’s right before she leaves. A frustrated Theo thumps his head on the freezer they just kissed on.

The Young and the Restless spoilers say Theo’s playing his cards right, so it’ll be interesting to see what’s next. We’ll give you updates as other Y&R news and rumors emerge. Stay tuned to see what else is brewing in Genoa City.