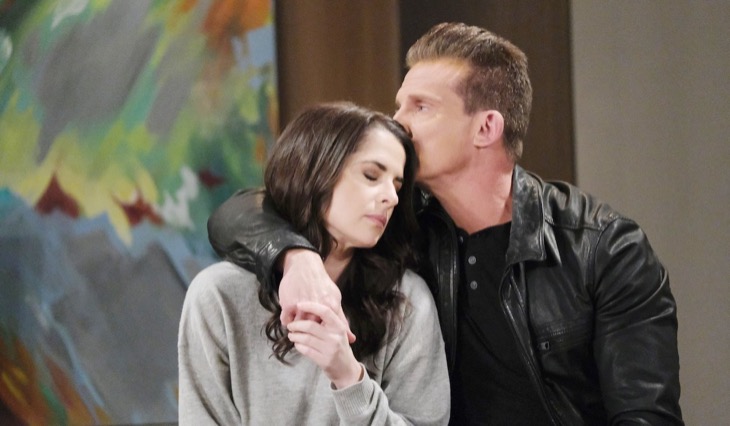 1)  Sam McCall and Jason Morgan are ‘life or death’ intense

JaSam are all in when they’re together. There are no half measures. They are either trying to hurt each other in the most awful ways possible because they’re wounded or jealous – or they are loving each other so hard it feels like they could melt into one person.

It doesn’t matter if Jason is a mob boss, a dad, or an amnesiac, Sam is ready to take him as he is without any adjustments. Sam does not want to change Jason and doesn’t force him to be someone else to be with her. That’s a great thing – complete and utter acceptance.

In a time when Jason was truly “Stone Cold” it seemed like Sam was the only one who could get a laugh or smile out of the mob hitman. Now that Jason is back to his pre-enforcer self and is emotionally open, imagine how much more she could get out of him!

When Jason is with Sam, they still find adventure – like dangling from the parapets of Wyndemere. And when they are JaSam, they always got into (and out of) scrapes together while having fun.

In the past, they’ve stood together against enemies, the cops, and other forces that would harm one of them or tear them apart. They are very ‘us against the world.’

6) Sam McCall is Jason Morgan’s equal in every way

Jason is a lover and a very dangerous fighter and Sam is the only woman that can stand toe-to-toe with him in every arena. She’s just as brave, deadly, and action-oriented as Jason is. He’s more of a suburban dad with Liz but with Sam, he’s like an action hero with a heroine at his side.

7) Sam McCall and Jason Morgan have survived love and loss

Some of the best JaSam moments have been the most painful. Like when Sam lost baby Lila and Jason was there for her or when Sam lost her hearing and Jason signed “I love you.” They have had big highs and tragic lows – and loved each other intensely in both situations.

8) Sam McCall and Jason Morgan embody the Dragon and Phoenix

There are some great symbols recurring throughout their relationship like the shooting star. But perhaps the most poignant is the dragon and phoenix representing Sam as the yin to Jason’s yang. He even stole those figurines when he was a full amnesiac because he was drawn to them.

Even when they have been at odds in the past, Sam and Jason sizzle. The super couple is super hot.

10) Sam and Jason are destined

No matter what, these two find each other. They always end up together – as if fate demands it.

In the coming weeks, GH spoilers and rumors reveal, there are two big hurdles JaSam must cross in order to get back together and live as husband and wife.  First of all, there are Sam’s parole restrictions that prevent her from spending time with Jason. Robert Scorpio (Tristan Rogers) might be able to fix this problem once he gets the goods on Peter August (Wes Ramsey).

Even worst, the brewing war between the Corinthos mob and Cyrus Renault (Jeff Kober) gang puts Jason straight in the crosshairs.  Naturally, Jason dare not risk being around Sam and the kids until Cyrus has been taken care of.

However, we are sure it is only a matter of time before our favorite couple is back together again!

Stay tuned to Soap Opera Spy for more on Jason and Sam as the plot moves forward. We have detailed daily ‘General Hospital’ spoilers plus casting news and more!

Share your thoughts in the Comments section below and join the SOS community, for all the Soap News Keep Visiting Soap Opera Spy, For all the Royal News & Brit Soaps check out Celebrating The Soaps!

Bold and the Beautiful Spoilers: Sally And Penny Hide Flo – Wyatt In The Dark For Awhile

Days of Our Lives Spoilers: Gabi Gets Inside Jake’s Head, Mechanic Questions His Own Identity