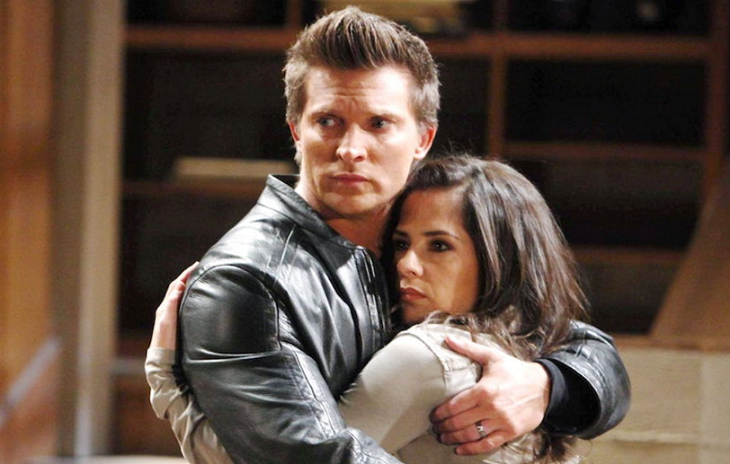 Unfortunately, since Sam decided to join Dawn of Day, intending to act as an undercover plant in order to get close enough to Shiloh Archer (Coby Ryan McLaughlin) to discover his and the cult’s weaknesses and take him and it down, alone time has been nearly impossible.

Shiloh has seemed to haunt her every move, showing up at Kelly’s when she was there with Danny (T.K. Weaver) for example. Jason was already upset about Sam being required to be available to Shiloh practically 24/7, but this week he’ll get some alone time with Sam. Although it may not be very long of a time. JASAM fans can only hope Shiloh doesn’t return Jason’s favor by looking through their windows.

Of course, Jason knows that Sam’s mission is vital, to be able to get Kristina Corinthos-Davis (Lexi Ainsworth) out of danger. Of course, when a person doesn’t want to be rescued, it makes things more difficult.

But if between Jason and Sam, Sonny Corinthos (Maurice Benard), and the police in the form of Detective Harrison Chase (Josh Swickard) they can bring down the whole organization by taking down Shiloh himself, many people will be saved.

General Hospital viewers know, and Sam may have noticed, Shiloh’s overtures to Brad Cooper (Parry Shen) and his fussing over Wiley Cooper-Jones (the Maricano twins). If Shiloh succeeds at what he’s trying to do, he will not only have brought Brad into the cult but baby Wiley as well.

General Hospital Spoilers – Could Lucas Jones Fall For The Cult?

It’s doubtful Lucas Jones (Ryan Carnes) will fall for Shiloh’s con games but if he sees it’s causing Brad to want to be a better man, he may go to a rally or two, and he could get caught up in the cult as well.

That would be two more family members that Jason and Sam would have to rescue, since Lucas is Sam’s half-brother through their father, Julian Jerome (William DeVry). Wiley is actually related to Jason since he’s really Jonah Corinthos, and Jason and Michael are related through Jason’s dad, the late Dr. Alan Quartermaine (Stuart Damon).

Today marks our 56th Anniversary, an accomplishment that would have been impossible without you, the viewers, and everyone who worked tirelessly over the decades (in front of and behind the camera) to bring General Hospital to life. Thank you, from the bottom of our hearts. #GH56 https://t.co/5gKQTV5YH1

Once this cult and Shiloh are safely taken down and not a danger, then Jason and Sam (and the rest of the family) can settle down and go back to normal life – if life is ever normal in soap opera land, right? Stay tuned to General Hospital and keep checking General Hospital spoilers frequently to see the latest developments, news, and spoilers!

EastEnders Spoilers: Is Tiffany Butcher The Next Person To Exit?