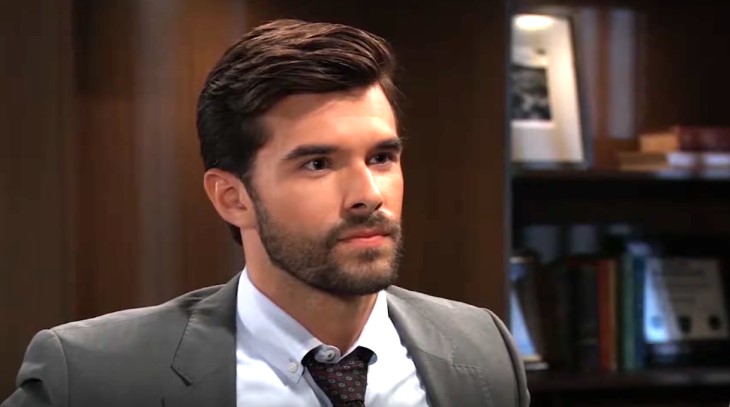 Detective Harrison Chase came to the Port Charles Police Department in 2018, to replace Detective Nathan West (Ryan Paevey). General Hospital viewers will recall that Nathan, who was married to Maxie Jones (Kirsten Storms) and expecting their baby, was killed in a shootout with his birth father, Cesar Faison (Anders Hove) in front of her, in the Crimson Magazine offices. He became Detective Dante Falconeri’s (Dominic Zamprogna) new partner.

He was soon revealed to be the much younger half-brother of Dr. Hamilton Finn (Michael Easton). He had also been revealed to have come to Port Charles to hunt down Janelle Benson (Chloe Lanier) in order to bring her to justice for the death of Zachary Grant, but she had seduced him and he lost his police credentials in Florida when their affair was exposed, which also got the case against Nelle for the death of Zachary Grant thrown out. He worked to get his credentials back and then came to Port Charles.

Working with Michael Corinthos (Chad Duell), he eventually got Nelle incarcerated, although in recent storylines she has obtained parole and is in a custody battle over her and Michael’s child, Wiley Corinthos (Erik and Theodore Olson) who Nelle had swapped with Brad Cooper (Parry Shen) for his and Lucas Jones’ (Ryan Carnes) adopted dead baby, who was Chase’s girlfriend’s, Willow Tait (Katelyn McMullen) baby with Shiloh Archer (Coby Ryan McLaughlin).

Swickard, who before coming to General Hospital appeared on two Disney Channel shows, Liv and Maddie and K.C. Undercover and also guest-starred on Nickelodeon’s short-lived School of Rock, talks about the character and why even though Sonny Corinthos maybe Chase’s match, he will probably never take him down!

As far as the character’s development on the show, Swickard says, “After two years, he has his feet planted. He’s in a solid relationship that works, developed a relationship with his brother, Finn, and has friends. It gives him a sense of confidence.” Of the possibility of Chase ever taking down Sonny, Swickard says, “It’s because they know Sonny would lose to Chase, and they don’t really want that to happen,” the actor joked. “No, that would be great! I’d love to see that.

If Chase could join the Mob for a day or two, that would be a dream. And I think there is that potential for them to work together. But at the end of the day, Chase is a cop and the law is the law.”