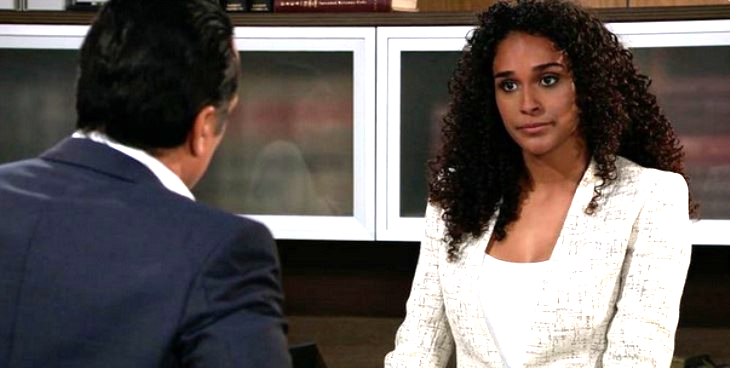 As viewers of recent episodes know, Sonny was furious when he discovered that drug shipments ordered by the criminal mastermind, Cyrus Renault (Jeff Kober) made it through his territory with zero challenge.

As Sonny raged to his best friend (and enforcer), Jason Morgan (Steve Burton), this could mean only one thing. Obviously Cyrus had an operative inside the PCPD! Who that plant was, however, was up in the air until Jason helped Sonny put two and two together.

Once Sonny and Jason reasoned that Cyrus Renault had to be blackmailing a cop in order for the police to rearrange their assigned watches. When Jason remembered that Jordan’s son, TJ (Tajh Bellows) had gone missing, there weren’t many deductions that needed to take place. 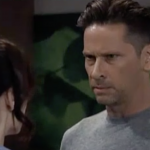 To Sonny, it was clear that Cyrus had kidnapped TJ, was blackmailing Jordan, and now because Jordan acquiesced to the drug kingpins demands, she’s a dirty cop. It was no surprise then that Sonny burst into Jordan’s apartment in order to confront her!

Now, those who have been keeping up with the story over the past few months know that Jordan has had plenty of opportunities to work with Sonny. The two could have become allies at multiple points if Jordan had simply been pragmatic. Sonny knows this. (Of course, there are also plenty of moments the Mafioso could have moved against Cyrus all by himself. Why he chose not to is an interesting question.)

The bottom line here is that Jordan refused to ally with Sonny, and now his business is suffering insult because of that fact. GH fans might agree that any other head of a mafia crime family might simply see Jordan as a liability. In that case, it may seem an easier thing to simply get rid of her rather than help her get TJ back, or to help free her of Cyrus’s blackmail.

However, GH viewers also know that Sonny has never been the stereotypical mob boss. Sonny’s classy. He’s also uber smart. Sonny knows that Jordan is friends with Laura Spencer (Genie Francis) and that if he rescues her from the trouble she’s made for herself with Cyrus, Jordan is going to owe him big time. It’s therefore not likely that Sonny is planning on doing anything really bad to Jordan or her family.

GH viewers may see Sonny vent his fury at Jordan. However, when it comes to Jordan, Sonny’s bark may be worse than his bite. Fans may see Sonny scream at Jordan and castigate her for her utter stupidity (and at this point, a lot of people may be happy to see him do so). Ultimately, however, when Sonny makes his calculations, he will take into account what’s best not only for himself personally but for his organization as a whole. Being guilty of, and hiding, the murder of a police commissioner is probably not something Sonny wants on his conscience. (That, or it could cause too many questions and headaches. Whatever works, right?)

On the other hand, making a choice to save Jordan and her son could give Sonny a heaping helping of goodwill from the city of Port Charles. If in the process, Sonny was able to rid himself of the thorn in his side that is Cyrus Renault, so much the better.

The biggest questions here are not whether Sonny will be pissed at Jordan or whether he will decide to just get rid of her altogether. He will be angry. He won’t get rid of the police commissioner (no matter how annoying she’s been).

Though they’re both technically “bad guys,” the real question is how Sonny will go about rescuing Jordan, TJ, and basically all of Port Charles from a man eviler and perhaps more cunning than he is! Who will rule the city’s criminal element? Who will be the felonious king? Will it be Sonny or Cyrus? In the end, GH fans may agree … there can be only one.