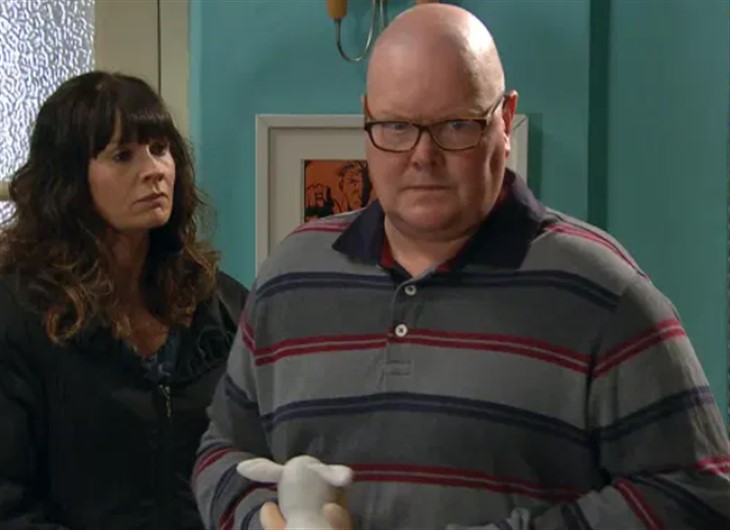 ITV Emmerdale spoilers reveal that Paddy Kirk and Chas Dingle (Lucy Pargeter) continue to have relationship problems. Things will get worse when Chas is seen getting close to Al Chapman (Michael Wildman). Could Paddy’s relationship be over or does he still have a chance to get the woman he loves back? Actor Dominic Brunt hinted what could happen with the couple.

Paddy and Chas have gone through quite a bit and have always managed to overcome their issues. Fans remember when Paddy accidentally left their daughter in the car and when he returned, she was missing. The couple had to go through questioning and a home investigation. There was a concern that they could lose their child, especially when Paddy was so consumed with the issues that he missed the appointment with the caseworker. However, everything turned out okay.

Then, Chas seemed to be irritable and distant during the lockdown. Now, there is a new issue and viewers wonder if Chas will betray Paddy.

Chas Dingle Gets Close To Another Man

Emmerdale spoilers reveal that Chas and Al will spend time together. When Paddy learns of this, he goes to see what is going on. He panics when he sees the two together and Chas ends up being charmed and attracted to Al. Paddy fears that his relationship is over and doesn’t know what to do to fix things.

When Paddy sees Al and Chas together, he will be devastated. Actor Dominic Brunt confirmed this during an interview with Inside Soap. Even though the couple has overcome so much in the past, could this really be the breaking point? Or do they still have a chance of making their relationship work?

The actor hinted that this might be the end for Paddy and Chas. However, Brunt also indicated that there might be hope. He teased,

“Paddy always wanted to start a family and he’s done so later on in life, so to lose Chas would be heartbreaking for him. However, they’ve dealt with everything that’s been thrown at them so far, so I’m really hoping they can deal with this.”

It seems that the couple might part ways for a bit, but could end up back together. Chas has obviously been going through some of her own issues. Maybe a separation will make her realize that she belongs with Paddy? We will have to keep watching to see what happens with this couple.