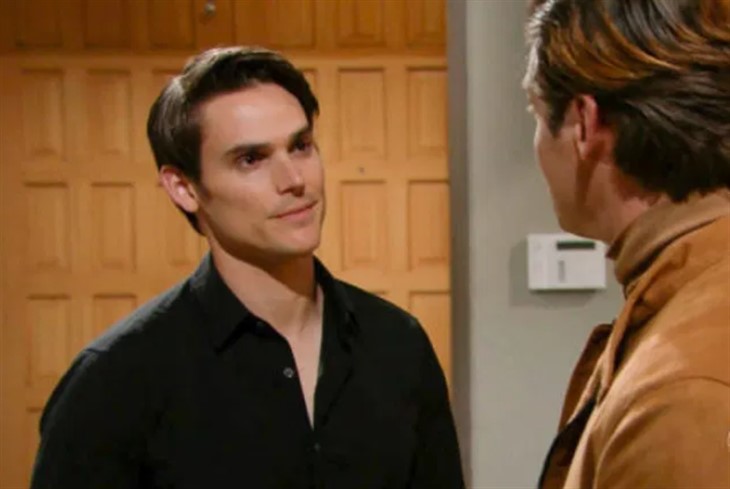 CBS The Young and the Restless spoilers document that Adam Newman (Mark Grossman) is, as usual, overconfident. He’s been telling Chelsea Lawson (Melissa Claire Egan) and Chance Chancellor (Donny Boaz) that everything regarding Las Vegas, Nevada, has been handled. It surely has not been, despite what’s been said.

Killing a man in self-defense is not a crime. But Adam not reporting it to the authorities was. His failure to do so at the time has been explained and is reasonable, based on Chance’s involvement. But the past is about to bite both men back.

This often referenced man was being pursued by Chance, as part of an undercover investigation. So, Chance’s awareness of Adam’s act and refusal to have reported what happened created lasting trouble for him as well.

Alyssa Montalvo (Maria DiDomenico) was diverted recently. She was unknowingly sent to pursue what is a bogus lead. Adam did that in order to get her off the Vegas trail.

But Alyssa’s contact with the dead man’s widow means that the pursuit of Adam will continue no matter any setbacks. DiDomenico’s character is as determined as Billy Abbott (Jason Thompson) to bring down their perceived enemy. Revenge is on their minds, regardless of their claims otherwise.

Chance has often said that he owes Adam his life. That conclusion hasn’t changed.

But Chance recently told Adam that he’s not going to allow his current life to be jeopardized. Boaz’s character wants full information from Adam in order to protect himself from whatever might develop next.

While Adam defended Chance’s life, during the period when his amnesia was in effect, he’s assumed control of his protection at this point in the plot. Chance doesn’t like that and will find a way to get answers somehow.

The Young and the Restless #YR Spoilers: Tuesday, October 6 – Adam’s Next Move – Kyle & Summer Shock Their Parents – Jack Gets A Leadhttps://t.co/qmT0kD25ng

The Young And The Restless Spoilers – Courtney Hope Projects As Widow?

If Courtney Hope (who recently departed the cast of The Bold and the Beautiful) doesn’t remain Sally Spectra, as part of a crossover to Y&R, then it’s reasonable to believe that she’s the dead man’s widow.

With Hope becoming a new cast member, it’s fair to think that her entrance will be dramatic and meaningful longterm. So, the creation of the Vegas issue appears to be the type of storyline that would enable Hope’s debut. But that’s speculation, just like Adam is forcing Chance to offer.