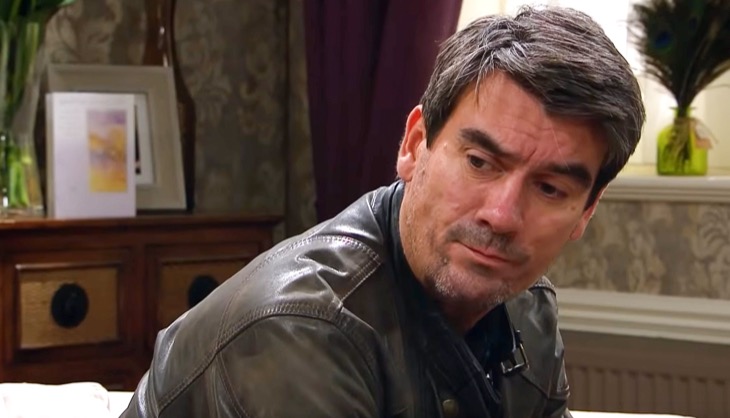 ITV Emmerdale spoilers and updates for the week of June 29 reveal Kim Tate (Claire King) will use sheer force to confront Andrea Tate (Anna Nightingale). Cain Dingle (Jeff Hordley) sulks over his ex moving on. One young couple will go through a lover’s spat, but another will find themselves giving into a dangerous attraction. Keep reading to find out more about what is ahead.

Ever since her devious scheme was discovered and Jamie Tate (Alexander Lincoln) was done with the marriage, Andrea took off with their daughter, Millie Tate (Willow Bell). The police will find her location and ask some questions. Then, Leyla Harding (Roxy Shahidi) arrives at the hotel. But she had no idea that Kim was following her! Kim comes up behind Leyla and forces her way into Andrea’s hotel room.

As the week goes on, Andrea will return home, but then catches Jamie and Belle Dingle (Eden Draper-Taylor) together. She leaves Millie to be found by Jamie, then decides to leave for good.

According to Digital Spy, Moira Dingle (Natalie J. Robb) could have a new love interest. Cain finds out about it and wonders what he should do. Should he tell Moira that he still loves her, or let her move on without him?

Meanwhile, Harriet Finch (Katherine Dow Blyton) is supposed to be at The Woolpack for a meeting. However, she doesn’t show up. She ends up talking to Mark Malone (Mark Womack) and says she doesn’t want him around her anymore. However, he has no intention of leaving. Harriet ends up feeling a bit threatened, but also finds herself attracted by the danger. Eventually, she ends up giving into temptation.

#Emmerdale Spoilers: Lockdown Episodes Had Clues To Future Plots – Here They Are https://t.co/kt4cL51vXY

Fans can also expect Jamie to apologize to Belle for not defending her. Lydia Dingle (Karen Blick) will suggest a fundraiser. Jacob Gallagher (Joe-Warren Plant) and Leanna Cavanagh (Mimi Slinger) will get into a fight. The young man wonders if it is the end of their relationship.

Which storyline are you looking forward to the most? Do you believe Andrea Tate is really leaving forever? Would she really abandon her daughter or does she have something else up her sleeve? Will Cain Dingle end up confessing his feelings when he learns that his ex is moving on? We will have to keep watching to find out what is coming up for our favorite characters.