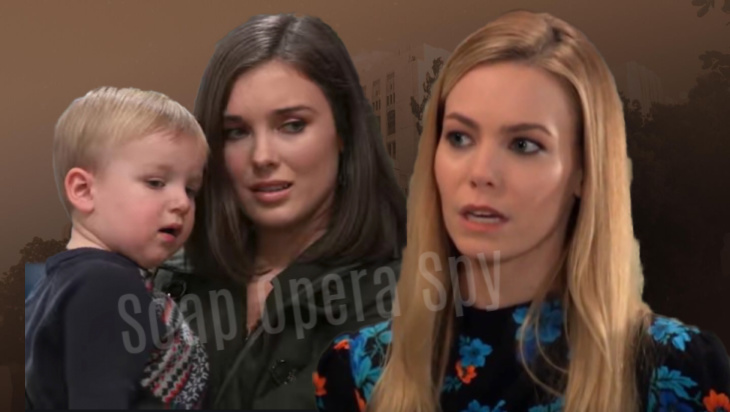 ABC General Hospital spoilers and updates tease that Nelle Jerome (Chloe Lanier) has gone into her custody hearing pretty confidently. As GH viewers know, Nelle is suing Michael Corinthos (Chad Duell) for sole custody of Wiley Quartermaine Corinthos (Erik and Theo Olson), and she’s shown that she’s willing to take drastic measures to get an edge in the case.

First off, Nelle found out that Michael married Willow Corinthos (Katelyn MacMullen) for his own edge in the custody case, so she promptly blackmailed Julian Jerome (William deVry) into marrying her to counteract Michael’s move. Given that the judge doesn’t seem to appreciate Nelle’s treacherous and devious history, it would seem that the marriages cancel each other out and things are sort of back to square one.

Michael has had character witnesses speak for him, and now it seems that Nelle will have Nina Reeves (Cynthia Watros) possibly testifying for her. When GH last left off, Nina had just arrived in the courtroom, seemingly ready to testify for Nelle. Of course, Nina could always end up undermining Nelle’s case, but we suspect that she’ll ultimately help Nelle.

And if that’s the case, then Nelle will probably look fairly decent in the judge’s eyes. Of course, so will Michael, and that leads us to wonder whether the most likely outcome here is that Michael and Nelle will be awarded joint custody of Wiley. That would certainly make for the most on-going GH drama, as Michael, Willow, Nelle, and Julian would somehow have to work together to raise Wiley.

A joint custody ruling would also likely create some real tension between the two couples, and especially between Nelle and Willow. After all, Nelle has said on past GH episodes that she doesn’t think that Willow has any business being around Wiley. But the fact remains that Wiley is much more familiar with Willow at this point than he is with Nelle, and the competition between the two ladies for Wiley’s affection could get fierce.

In fact, it would be a pretty humorous situation all the way around if Nelle ended up realizing that Wiley really loves Willow, while Nelle remains a stranger in many ways to the little boy. Wiley is a pretty easygoing kid, but let’s face it, he’s probably just not going to be as comfortable with Nelle at first, and that’s going to probably infuriate Nelle. Nelle could have a real struggle on her hands with Wiley going forward.

We’ll see what happens when new episodes of GH return, but we suspect that a joint custody ruling is coming and that Nelle is going to have a rude awakening when she realizes that Wiley is far more content in his home with Michael and Willow than with herself and Julian. In fact, the whole thing could make Nelle lash out against Willow and really exacerbate the situation between the women.

What do you think will happen here? Do you think that Wiley will prefer Willow to Nelle?