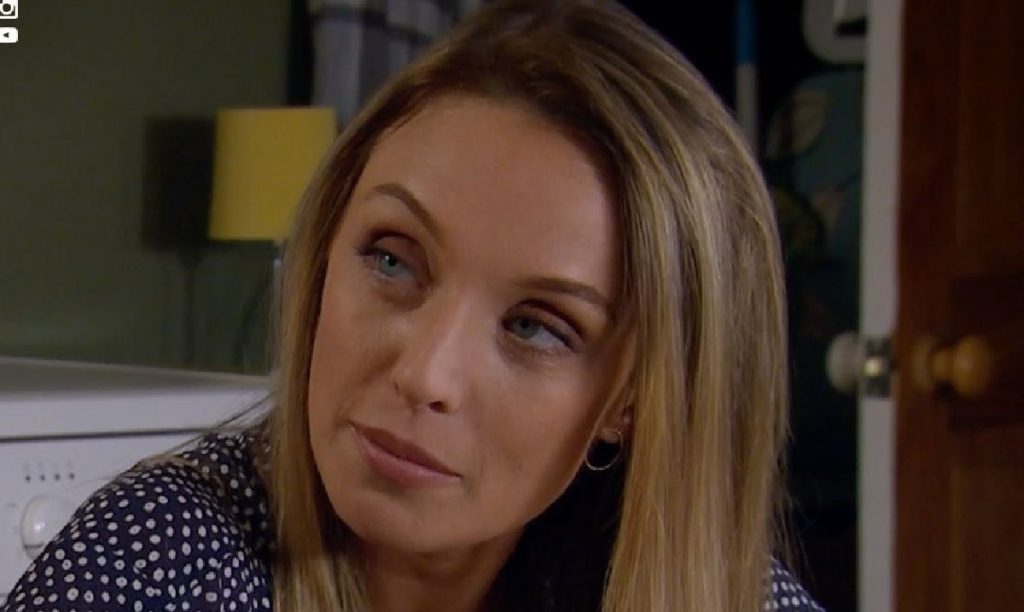 Emmerdale spoilers reveal that Leyla Harding (Roxy Shahidi) goes to the hotel where Andrea Tate (Anna Nightingale) is hiding out. She convinces her to return home before the situation gets worse. However, Kim Tate (Claire King) is spying on Andrea. Millie Tate (Willow Bell) is later sent back home and Andrea has seemingly abandoned her. What has Kim done now?

Sneaking off to check in with Andrea at the hotel where she is hiding, Leyla thinks nobody is watching. However, she is being followed by a mysterious person, who we later find out is Kim Tate. When Leyla arrives at the hotel, she updates Andrea on what is happening with Jamie Tate (Alexander Lincoln) and the missing persons’ investigation.

Later in the week, expect Leyla to pressure her friend to just go back home and end this nonsense.

Emmerdale spoilers from the Mirror reveal that Andrea and Millie go back home to face the music. Andrea expects Jamie to be distraught, pacing the floor wondering where his missing wife and child are. However, she arrives to discover that Jamie isn’t thinking about her at all. She witnesses Jamie and Belle Dingle (Eden Taylor-Draper) proclaiming their undying love for one another.

This is when Andrea realizes that there is no chance of her family staying together. She has lost Jamie forever. She decides to leave for good, but she doesn’t take Millie with her. Instead, she leaves the child there to be discovered by Jamie.

However, would Andrea really abandon her child? Is this another one of her devious plans? What exactly is going through her mind and why would she decide to take off without her daughter?

It seems that Kim probably waits until Leyla leaves the hotel. Then, she knocks on the door and surprises Andrea. She opens the door thinking that it’s just Leyla again. When Andrea comes face-to-face with Kim, she has no choice but to let her in. Knowing Kim, she most likely does one of two things. She either makes some sort of deal with Andrea. Or, she uses manipulative logic to “reason” with the heartbroken mother.

She probably tells Andrea that her actions will make a solid custody case for Jamie, and that he will win. Kim will spare no expense to make sure Millie stays with her father. She might even say that the custody battle could go on for years, and it would just end with Andrea losing her daughter. The soap villain probably will add that the best thing Andrea can do is return Millie to her stable father and walk away.

Under normal circumstances, Andrea would stay and fight for her child. But she is devastated, heartbroken, and lost. Add to this the fact that Kim is clever, cunning, and convincing, Andrea might have it in the back of her mind. What seals the deal? When Andrea sees Jamie with the woman he really loves. The sight could break Andrea to the point where she thinks Kim is right and simply walks away.

However, could she return one day and fight for her child? We imagine she will, it’s just a matter of time.  Be sure to catch up on everything happening with the soap right now. Come back here often for Emmerdale spoilers, news, and updates.