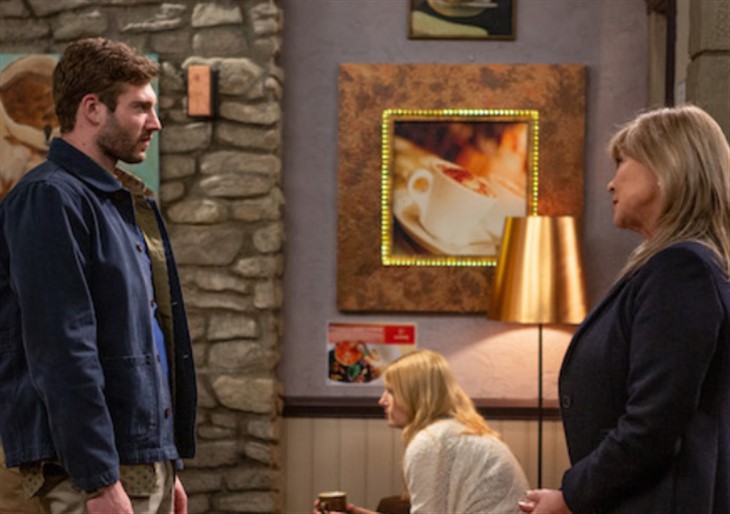 ITV Emmerdale spoilers reveal that Jamie Tate (Alexander Lincoln) keeps trying to convince everyone that Belle Dingle (Eden Taylor-Draper) was responsible for the hit-and-run. Of course, everyone knows he’s just covering for his own crime. Kim Tate (Claire King) has been updated and noticed a loose end. When she returns, will she betray her son before things get worse?

Kim loves her family, especially her son and granddaughter, Millie Tate (Willow Bell). However, she has always tried to fix his messes, correct his mistakes, and solve his problems. She has gone to extreme measures in order to do so, even with his relationships. When she learned that he hit Moira Dingle (Natalie J. Robb) with his car, she took action to make sure the evidence would never be found.

However, when Jamie was updating Kim via video chat, she immediately noticed a loose end. Emmerdale spoilers reveal that Kim was frustrated that Jamie didn’t have Andrea Tate (Anna Nightingale) on his side. Even though Jamie assured his mother that everything was going smoothly, she knows the truth. With Andrea and Belle’s alliance, Jamie could easily go to prison.

If they continue to investigate Jamie, then Kim will become part of that. They might find out about her getting rid of evidence and it might bring to light her other crimes and devious deeds. She can’t allow that to happen and it seems every single time she tries to “fix” things for Jamie, he does something else to muck it up.

There is also the reputation factor to think about. Sure, Kim is a villain in the soap, but she also likes to be perceived a certain way by the general public. There are so many reasons for Kim to take control and that means she might have to make a difficult decision.

#Emmerdale Spoilers: Jamie’s Drunken Accident Blamed On Belle? Andrea Might Make Sure Of It https://t.co/4hQMTXZiRe

Express speculated that Kim might return and betray her own son. It will make the Dingle family happy to see justice being served. Now, the Dingles and the Tates don’t exactly get along, but Kim knows just how much worse this situation can get. In order to be a “hero” to the community and restore order… as well as protect herself, could Kim betray Jamie “for the greater good?”