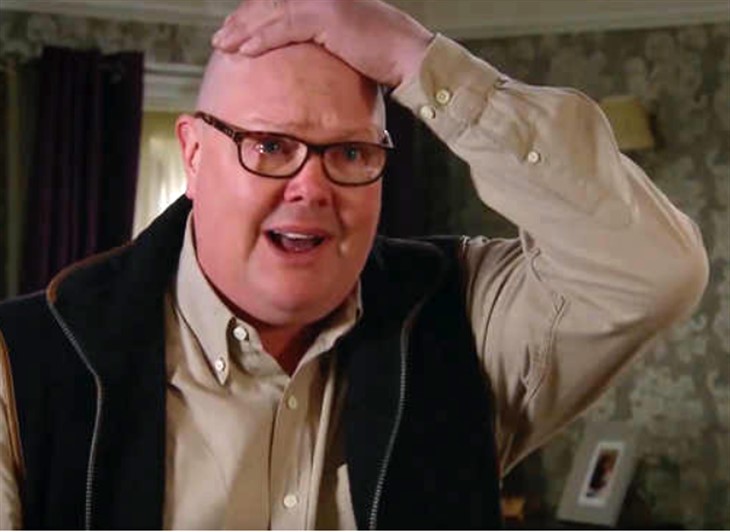 ITV Emmerdale spoilers for the week of October 5 reveal that Paddy Kirk (Dominic Brunt) panics when he catches Chas Dingle (Lucy Pargeter) sneaking around with another man. Jamie Tate (Alexander Lincoln) fights back, but is he really any match for the Dingle family? Later, Luke Posner (Max Parker) is shocked when he finds Jamie’s unconscious body.

Emmerdale spoilers for Monday reveal that Chas and Al Chapman (Michael Wildman) go for a picnic. Meanwhile, Paddy panics when Bear Wolf (Joshua Richards) mentions the two are together. During the picnic, Al and Chas share an electrical moment, but she gets bashful and turns away. It is teased that she is playing a very dangerous game. What neither of them realizes is that Paddy is within earshot and panics over his relationship is over.

It is also teased that Belle Dingle (Eden Taylor-Draper) might regret her deal with Andrea Tate (Anna Nightingale).

On Tuesday, Jamie comes up with a plan and makes preparations to put it into action. Bear can’t help but notice the obvious tension between Paddy and Chas. Then, Manpreet Sharma (Rebecca Sarker) gets worried when she notices her sister charming the socks off of Rishi Sharma (Bhasker Patel). He certainly is enjoying the attention and is finding out about the newcomer’s story.

Emmerdale spoilers for Wednesday reveal that the Dingle family plots their revenge against Jamie. Will they end up making him pay the price or could this whole scheme end up backfiring? Also, Manpreet has no intention of making things easy for her sister. Others are beginning to notice and think Manpreet is being too harsh on her sibling. Is there more to the sisters’ story than we know?

Emmerdale spoilers reveal that on Thursday, Luke will make a shocking discovery when he stumbles upon Jamie’s unconscious body. Now, did the Dingle family really get revenge or is this staged by Jamie?

On Friday’s episode, expect to see Dawn panic and end up making a cruel move. Meanwhile, Victoria Sugden (Isabel Hodgins) will be curious after finding a package on her doorstep. Is this from Luke or someone else? Plus, Charity will wonder why Vanessa won’t take any of her phone calls.