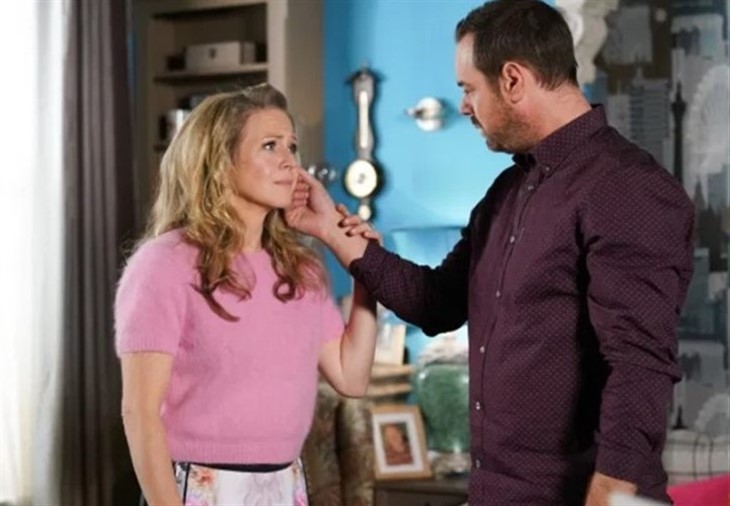 Eastenders spoilers reveal that Linda Carter (Kellie Bright) will end up telling her husband about Max Branning’s (Jake Wood) kiss. However, she ends up keeping an even bigger secret from Mick Carter (Danny Dyer). What she hides from him could mean the end of the Carters’ marriage. Keep reading to find out what she isn’t telling Mick about that night.

Last week, we saw Linda give into temptation and have a sip of an alcoholic drink. She thought nobody saw her, then when she looked over her shoulder, Max was quietly staring at her. They ended up talking about Linda’s struggle with alcohol and Max reacted differently than Mick. While Linda’s husband tends to treat her like a child and is very judgmental about her weakness, Max seemed to understand. This led to the two bonding and they ended up sharing a kiss.

Eastenders spoilers reveal that after the kiss, Linda was ashamed of what she had done. She ran off and while secrets between the Carters have been confirmed, the kiss isn’t one of them. It is stated that Linda will end up telling Mick about the kiss with Max. However, she doesn’t tell him everything.

While Linda does admit to the kiss, Linda hides an even bigger secret from her husband. She tells him that the kiss meant nothing to her, but that’s not true. The kiss with Max meant something special to Linda and it turns out that Max feels the same way. He will tell her that kissing her was no accident. However, will she give into her feelings for Max or stay loyal to Mick?

Linda might be committed to being faithful to her husband, but that might not last long. Frankie Lewis (Rose Ayling-Ellis) tells Mick that he might be her father. It is a huge bombshell and could create a lot of problems in his marriage. If Frankie is his daughter, then that means Mick slept with someone else during his marriage to Linda.

When she finds out this news, could she decide to go ahead and give in to her feelings for Max? Could it mean the end of Mick and Linda’s marriage? We will have to keep watching the soap to see what happens with this storyline.