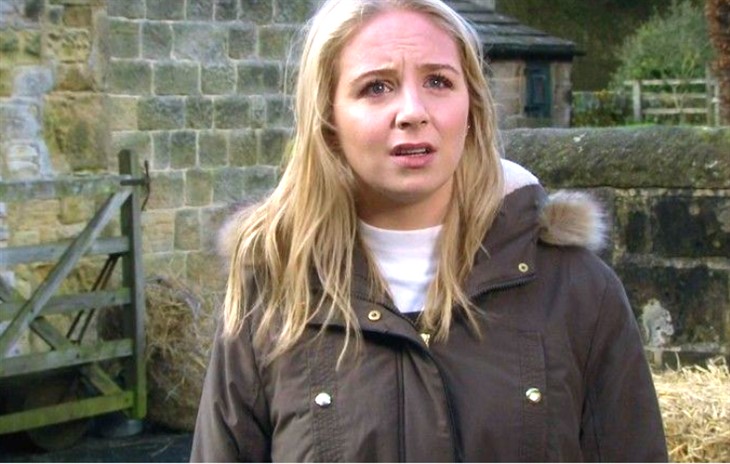 ITV Emmerdale spoilers reveal that Jamie Tate (Alexander Lincoln) reaches out to Belle Dingle (Eden Taylor-Draper). He makes a desperate plea for her to just listen to what he has to say. When he informs her that his wife is blackmailing him and why Belle threatened to report Jamie to the police. However, he ends up feeling relieved by the idea.

As viewers are aware, Jamie went searching for Andrea Tate (Anna Nightingale) the night he hit Moira Dingle (Natalie J. Robb) in his car. He fled the scene and no matter what happened, Andrea encouraged him to keep quiet. Then, she used the information to her advantage.

Emmerdale spoilers reveal that Andrea has been blackmailing and threatening Jamie. If he ever leaves her, then she’ll go straight to the police. Of course, he doesn’t want to risk his freedom because then there is a chance that he will never see his daughter again. However, the lengths that Andrea is going are simply unbelievable. Not only does she demand that Jamie stay with her, but she wants to pretend that they are a happily married couple madly in love with one another.

During the week of August 10, expect Jamie to ask Belle to please hear him out. Even though she is heartbroken and furious, she listens to him. That is when Jamie tells her that Andrea is blackmailing him. He then has to tell her that it was him that struck Moira in his car and left the scene of the accident.

Emmerdale spoilers reveal that Belle is horrified and threatens to take the information straight to the police. However, she might be surprised to find out that this would actually be a relief to Jamie. What’s worse: him possibly going to prison or staying under Andrea’s blackmailing thumb?

Meanwhile, Belle will have a big decision to make while others wonder if she is back with Jamie. It will raise a lot of questions that she won’t be able to answer without hurting the man she loves. Does she report what she knows to the authorities? Tell Moira, who will no doubt tell Cain Dingle (Jeff Hordley)? Or keep it their secret? We will have to keep watching the soap opera to see how this story plays out.