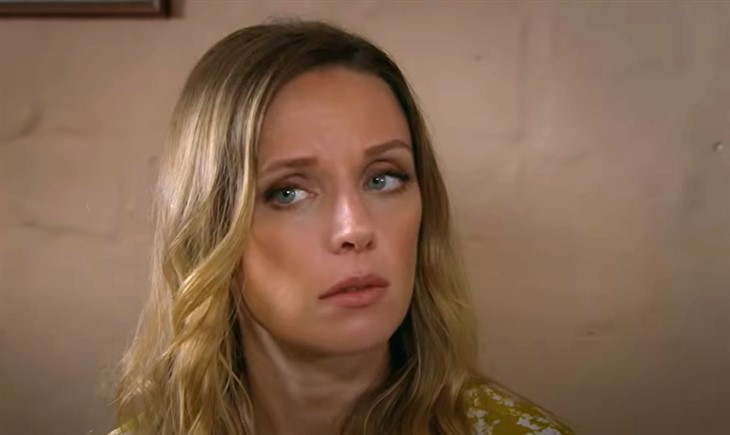 ITV Emmerdale spoilers and updates reveal that Leyla Harding (Roxy Shahidi) lied about not knowing Andrea Tate’s (Anna Nightingale) whereabouts. She knows where her friend is, which is at a hotel. When Leyla goes to meet the missing woman, she doesn’t realize that someone is following her. That person turns out to be none other than Kim Tate (Claire King). What happens next?

Emmerdale Spoilers – Leyla Harding Gets In Too Deep

Viewers knew that Leyla shouldn’t agree to help Andrea get revenge on Jamie Tate (Alexander Lincoln) and Belle Dingle (Eden Taylor-Draper). However, she does it anyway and fans saw the messages between the secret lovers publicly broadcast to everyone.

When Andrea and Millie Tate (Willow Bell) later disappeared, Leyla denied having any clue where they were. Well, it is confirmed that Leyla has once again gone to bat for her friend. She is clearly just getting in way too deep.

Emmerdale spoilers reveal that Andrea and Millie are hiding out in a hotel. When Leyla rushes off to meet the missing woman, she is followed by Jamie’s mother. That shouldn’t come as too much of a surprise. If anyone would be able to track Andrea down, it is Kim.

Now, knowing the soap villain, she won’t announce her presence right away. She will wait patiently and gather as much information as she can. Then, she will make a move.

Fans can expect Leyla to try and convince Andrea that she needs to return home with Millie. She will fill her in on the police getting involved and Jamie being a prime suspect. She may also tell Andrea how things could spiral into dangerous territory if she keeps hiding out. It seems that eventually, Andrea and Millie do return home. However, there is an unexpected twist to this story.

Emmerdale spoilers from the Mirror reveal that when Andrea comes home, she sees Jamie and Belle declaring their love for one another. It is heartbreaking for Andrea to see and makes the decision to leave for good.

Imagine Jamie’s surprise when he goes inside the house and finds his daughter there, safe and sound. But there is no sign of Andrea. Would she really abandon her daughter? Or does she have another plan in the works? Is Kim somehow responsible for this sudden turn of events? We certainly wouldn’t put it past her.

#Emmerdale Spoilers: Lockdown Episodes Had Clues To Future Plots – Here They Are https://t.co/kt4cL51vXY

But we have a feeling that this isn’t the end of Andrea’s story. She will resurface at some point, but when or what she does next remains to be seen.