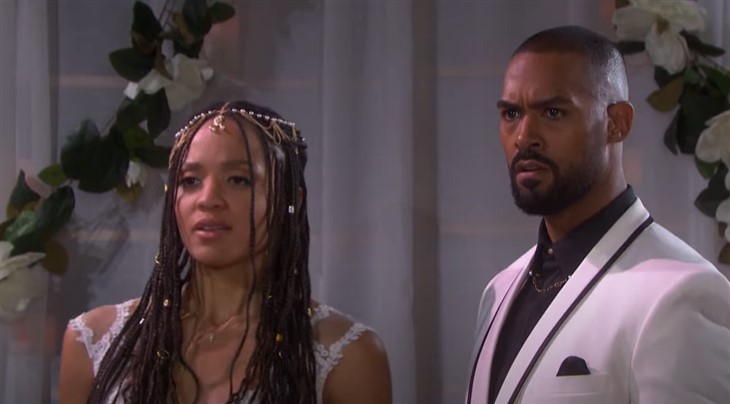 NBC Days of Our Lives spoilers and updates reveal Gabi Hernandez DiMera (Camila Banus) causes wedding chaos after learning Lani Price (Sal Stowers) is pregnant. She gets everything Gabi loses. Two stolen men, one dead husband, the “Stefake” mystery, a criminal trial, and now she is getting a baby. The infertile Salemite’s rage is reignited with a new reason to hurt Lani.

DOOL spoilers reveal that Gabi’s issues began when she dated JJ Deveraux (Casey Moss). One day, he decided to be with Lani instead. After their split, Gabi got together with Eli Grant (Lamon Archey). A police shooting caused JJ to become suicidal and Gabi was there for him. But Lani thought they were cheating and told Eli.

That is when the two detectives decided to get revenge by sleeping with each other. It ended in a pregnancy and the two became an official couple. But Gabi will never forget that Lani took not one, but two of her boyfriends.

The next incident that enraged Gabi was when she lost Stefan DiMera (Brandon Barash). She finally found love and even though they weren’t married long, it was full of passion. That is, until Lani killed Stefan. So now, that makes three men that Lani is unintentionally taken from Gabi: two through seduction and one by murder.

Days of Our Lives spoilers reveal that the exploding pacemaker and forcing Lani to dump Eli on their wedding day wasn’t just about the shooting. Over the years, Gabi lost all of her men to Lani. So, when the love of her life was killed by her, the fashionista snapped. Not only did she split up “Elani,” but Gabi reclaimed Eli, one of the men that Lani took from her.

As fans recall, Gabi was wrongly convicted of murder by one of Abigail DiMera’s (Marci Miller) personalities, “Gabigail.” It sent the fashion queen to prison, where she was brutally assaulted. It left her infertile, which was devastating. So, when she learns that Lani is pregnant, Gabi is filled with envy and resentment. In Gabi’s mind, Lani once again took something that belonged to her. First, it was men and now it’s a baby. It has refueled the Latina’s rage.

We expect the pregnancy detective to be a target now that Gabi has a brand new reason to hate her. The question is, what kind of hateful revenge plot does she come up with next?