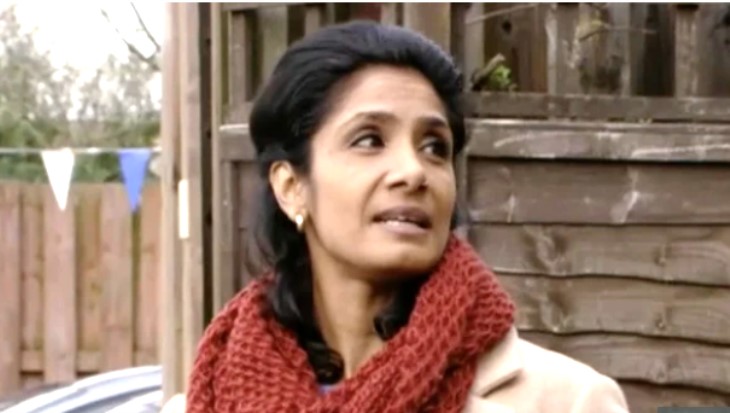 BBC Eastenders updates and spoilers reveal that Kush Kazemi (Davood Ghadami) suspects Jean Slater (Gillian Wright) isn’t taking her bipolar medication. He decides the pills must be crushed up and slipped to Jean. However, when she has a seizure, Suki Panesar (Balvinder Sopal) is suspicious and observant. Will Suki use the discovery to help an enemy or use it to her advantage?

During recent episodes, people have been concerned about Jean’s behavior. Kush believes that she isn’t taking her bipolar medication. After questioning her and doing some digging, Kush is positive that his suspicions are on target. So, he makes a bold move. He and Shirley Carter (Linda Henry) crush up the medication and slip it to Jean.

Eastenders spoilers previously teased that Jean would collapse and have a seizure. Before that, she seemed dizzy and had a loss of balance. She almost appeared drunk and could barely stand up let alone go shopping. She was also doing a lot of deep breathing and bending down. This also indicates the world around her was spinning out of control.

Eventually, Jean would collapse and have a seizure. An ambulance is called, but for doctors to treat her, they have to know all the facts.

According to Metro, Suki tries to help Jean while waiting for the ambulance to arrive. However, after the paramedics tend to Jean, Suki makes some observations. As fans know, she has sharp eyes and ears. She often notices things that others would miss.

It is teased that Suki realizes that not everything is as it seems when it comes to Jean’s seizure.

As fans recall, Suki and Jean don’t have the best relationship. Jean thought she had made a friend and confided in Suki. It was later revealed that the Panesar matriarch lied about having cancer. She even used Jean’s own words and claimed them as her own. Obviously, trust was broken and the two are now adversaries. So, it’s interesting that Suki stopped to help Jean during her seizure.

Suki was shamed by her children for the cancer scam, but she won’t apologize. Her goal was to bring her kids back together. She stopped at nothing to make that happen and refuses to apologize for her scheme. She might never admit her actions were wrong, but she still seeks redemption.

Eastenders Spoilers – Save A Life Or Take Advantage?

She could use her discovery to help save Jean. If doctors know all the information, then they can treat her. There is also the theory that Jean is suffering from a mystery illness and the crushed pills didn’t cause the seizure. This could also be what Suki’s discovery is about.

However, Suki rarely does anything unless it benefits her somehow. So, it’s also possible that she will use the secret to her advantage. But what could she want and will she end up regretting her decision?

Days of Our Lives Spoilers: Maggie and Sarah Reconcile, But Rocky Road Lies Ahead