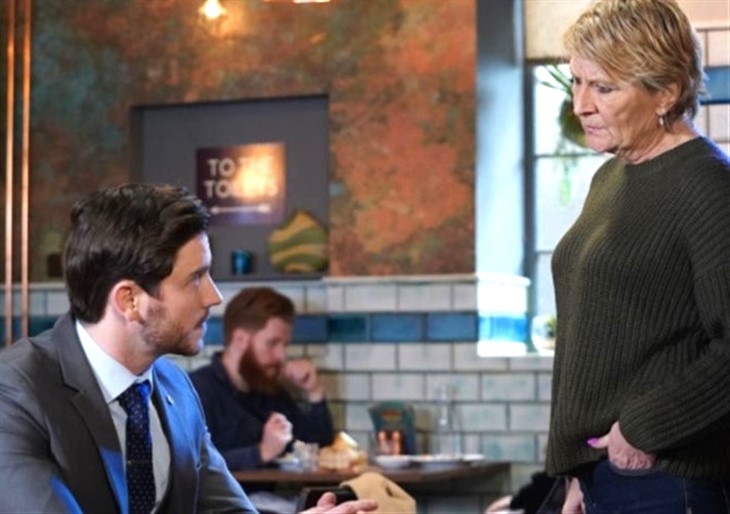 BBC Eastenders spoilers reveal that viewers were horrified that Gray Atkins (Toby-Alexander Smith) was going to blow himself up, as well as his young children. He was stopped by Shirley Carter (Linda Henry) and this week in London, he will ask her to move in with him. However, could Shirley end up figuring out that Chantelle Atkins’ (Jessica Plummer) death wasn’t exactly an accident?

Ever since Chantelle’s death, Gray has been hiding a lot of secrets and trying to cope with his own intense guilt. It’s getting more difficult for him with each passing day, though. After the fiasco at Whitney Dean’s (Shona McGarty) trial and some haunting words, Gray nearly turned himself in, but that plan got interrupted, just like everything else.

Later, Gray tried to blow himself up, along with his sleeping children. However, he was stopped by Shirley, who ended up spending the night while clutching the Zippo lighter tightly in her hand.

Eastenders spoilers reveal that Shirley gave Gray an ultimatum. Now, he’s going to turn things around on her by making her a deal. He suggests that she move in with him and the children. After Mick Carter’s (Danny Dyer) outburst last week, Shirley will probably accept his offer. This way, she can keep an eye on Gray and feel like she’s doing something good.

Shirley had given Gray an ultimatum and doesn’t think he should be around his children right now. So, he could suggest that Shirley stay and that way, he could keep his kids. He didn’t seem to like the idea of them going to stay with relatives, such as Mitch Baker (Roger Griffiths) or Karen Taylor (Lorraine Stanley). He also was determined not to lose custody of them if Shirley called the authorities.

Eastenders Spoilers – Finding Out the Truth?

Eastenders spoilers reveal that something keeps Gray from confessing, even though the guilt is eating him alive. Each time he gets close to telling the truth, someone interrupts or he backs out of it. Likely, someone is going to figure out the truth and it just might be Shirley if she moves in with him. However, what will he do when and if Shirley confronts him with the truth? Will she end up dead, just like Chantelle?