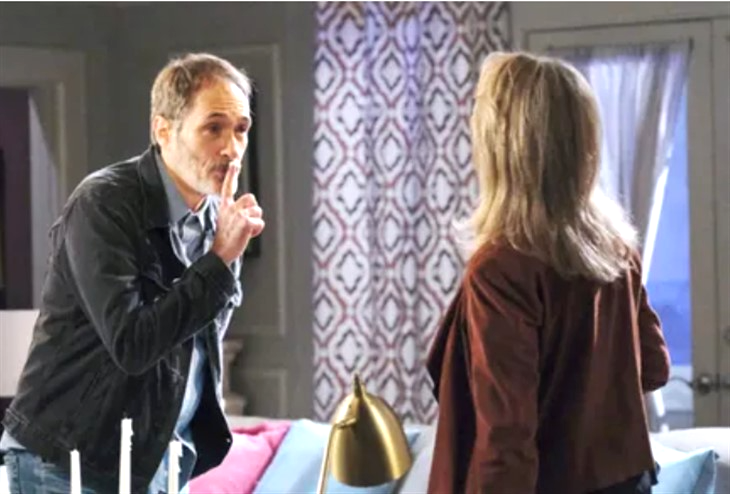 NBC Days of Our Lives (DOOL) spoilers tease that Orpheus, aka Milo Harp (George Del Hoyo) will demand that Dr. Marlena Evans (Deidre Hall) release his son Evan Frears aka Christian Maddox (Brock Kelly) from Bayview Sanitarium in an upcoming episode of Days of Our Lives!

Days Of Our Lives Spoilers – The Blackout Begins, And Marlena Evans Is Taken By Surprise

A blackout obscures the entire city of Salem, as three dangerous criminals have escaped from Statesville Prison, also without power. Marlena comes home to find Orpheus sitting on her couch! Longtime Days of Our Lives viewers will recall that Orpheus was once John Black’s (Drake Hogestyn) ISA partner, and the two had a serious falling out because John accidentally shot Orpheus’ wife, Rebecca. This was back years ago when John Black was thought to be Roman Brady (now Josh Taylor).

Roman had disappeared and was presumed dead, and John had been brainwashed to think he was Roman. He took Roman’s place for several years until the real Roman surfaced. Orpheus, then known as Milo Harp, lost his mind when Rebecca died and became a terrorist. He had two little children, which at one point he had kidnapped Marlena and forced her to care for them. The two little children, now adults are Zoey Burge (Alyshia Ochse) and Christian Maddox, aka Evan Frears.

Somehow Christian, who had been convicted of the murder of Jordan Ridgeway (Chrishell Stause) and sent to prison, has wound up in Bayview Sanitarium where Marlena, a psychiatrist, has practicing privileges. Orpheus startles Marlena, who is by herself, as he tells her one never knows what surprises lurk in the darkness!

This time Orpheus doesn’t appear to kidnap Marlena but asks for her help. He wants her to intervene with Bayview to get his son Christian Maddox released. Marlena may or may not be able to legally, depending upon if she is Christian’s psychiatrist there. She works with many patients in the sanitarium, which is of course a mental hospital, but if he is not her patient her hands may be tied. He may pull the “Ben card” on her. He may remind her that she got a very dangerous criminal, the Necktie Killer out of Bayview. This of course was Ben Weston (Robert Scott Wilson) and the reason she could do the same for Christian. However, Ben was her patient. That makes a world of difference – Marlena would be hard-pressed to want to try to get a patient released through looking at their medical records alone. She formed a relationship with Ben, a professional one of course, and actually got to know the man.

She could see the changes in Ben. Unless there is a case of a physical malady affecting the brain, such as a brain tumor causing criminal behavior that has been removed, there is more to getting a psychiatric patient released than merely looking at a medical chart. Orpheus will be very insistent, however. Down the road spoilers indicate a desperate Marlena will try to get Christian released, however, she can make Orpheus no promises!