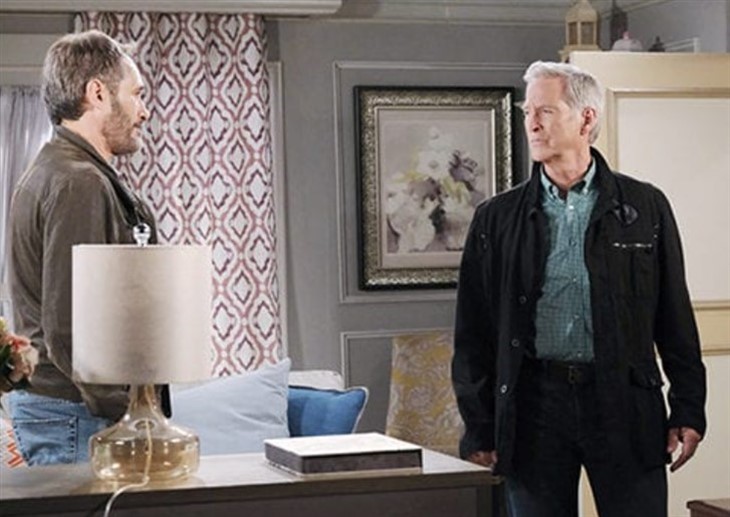 NBC Days of Our Lives spoilers reveal that in Salem John Black (Drake Hogestyn) has unpredictable outbursts and is capable of fierce rage due to his brain aneurysm. While there are downsides, could his symptoms actually do something good? It is teased that John battles Could his newfound rage make him capable of killing the villain with his bare hands?

Days Of Our Lives Spoilers – Aftereffects Of Brain Aneurysm

DOOL spoilers reveal that John’s loved ones were worried sick when he collapsed and had to undergo surgery. Then, they waited for what seemed like forever to see if he would wake up. He finally did, but nobody anticipated that his personality would be a bit different. They also couldn’t predict that he would have difficulty regulating his emotions.

We have seen John go through a large range of extreme emotions. Recently, he bawled like a baby and couldn’t explain why he was getting so emotional. Then, there is the rage that he exhibits.

He ended up punching Tripp Dalton (Lucas Adams) in the face and Steve Johnson (Stephen Nichols) could barely hold John back. There was the frightening way he slammed his fist into the table at Brady’s Pub, which Roman Brady (Josh Taylor) could hear all the way in the kitchen.

Days Of Our Lives Spoilers – Demands And Kidnapping

Days of Our Lives spoilers reveal that Orpheus will have Clyde Weston (James Read) kidnap Henry Horton (Jayna and Kinsley Fox). Then, Orpheus will demand that Dr. Marlena Evans (Deidre Hall) get Evan Frears aka Christian Maddox (Brock Kelly) out of Bayview. This is likely to set off John and with his mood swings, it could get really bad.

With John’s new fiery rage, he really is capable of anything if provoked. There are two things that mean more to John than anything… his wife, Marlena, and family, including Henry. It is confirmed that during the week of October 26 that John and Orpheus face off.

Could John’s symptoms from the aneurysm actually do something good and get rid of the supervillain for good? We will have to keep watching the NBC soap opera to see how this story develops over the next few weeks.